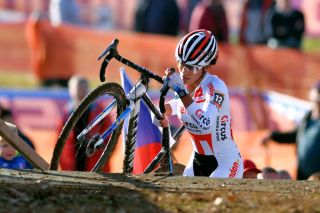 Ceylin del Carmen Alvarado (Corendon-Circus) claimed the victory at the DVV Verzekeringen trofee Hotondcross in Ronse on Saturday. The Dutch rider soloed to victory by 21 seconds ahead of her compatriots Annemarie Worst and Yara Kastelijn (777 teammates).

Alvarado opened a gap early on in the women's 45-minute race, as riders around her crashed, bobbled or suffered untimely mechanicals. Italy's Eva Lechner was the first to go down, and in the chaos, Alvarado found an opportunity to take the race lead and open a gap on her rivals.

The riders spread apart during the first lap and as they crossed through the finish line for the first time, Alvarado held a 19-second lead over Worst, 29 seconds over Kastelijn and 42 seconds ahead of Sanne Cant (Iko-Crelan). Those time margins between Alvarado, Worst and Kastelijn continued to grow through the following laps.

Cant, however, made up significant ground on Alvarado during the subsequent laps but crashed and ended up finishing in fifth place, just behind Evie Richards (Trek) who finished in fourth place.

Worst remains in the lead in the DVV series rankings, 1:02 ahead of Alvarado and 57 seconds ahead of Kastelijn.