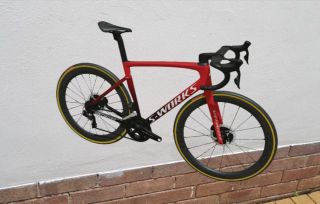 Specialized has released a sneak peek of its new Specialized Tarmac SL7, unveiling the new bike via a virtual reality app.

The Tarmac SL7, an update to the SL6 released back in 2017, is set to be fully revealed in a special online premiere on Tuesday, July 28, but on Thursday, Specialized gave a virtual reality preview via the Ride app.

A number of spy shots of the Tarmac SL7 have emerged around the internet this year, with speculation that the bike was set to be unveiled at the Tour de France before the COVID-19 pandemic delayed the release.

From what we can make out in the Ride app, the Tarmac SL7 has full hidden cables at the front end, no doubt routing internally through the aero handlebar setup, an advance on the SL6, which saw the cables enter internally at the frame.

This aero front end sees Specialized borrow from the Venge, while the seatpost gets an aero upgrade too, though not as radical as their aero entry.

Elsewhere, the Tarmac SL7 doesn't look a whole lot different to the SL6, at least through the virtual reality view of a small phone screen. Rest assured, there will be plenty of upgrades though.

You can view the new Tarmac SL7 on the Specialized Ride app, which is available to download on the iOS App Store and Google Play.

Cyclingnews will have full coverage of the Specialized Tarmac SL7 launch, including a first ride review of the bike next week.