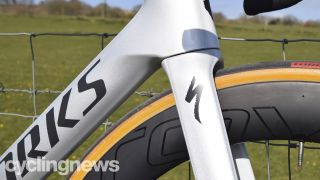 Specialized road bikes are well renowned among amateurs and professionals alike. The brand is among the biggest in the cycling world, and the tech produced is highly sought after by consumers the world over.

A number of Specialized road bikes have seen five-star reviews from our tech team, and the brand often features in our guides, such as best road bikes, best gravel bikes, and best aero road bikes.

With a sponsorship of three of the biggest professional teams in the world, in Bora-Hansgrohe, Boels-Dolmans, and Deceuninck-QuickStep, Specialized road bikes are commonly ridden to WorldTour victory, and as a brand, has become a major force in the global cycling industry since bursting onto the scene in 1974.

After initially selling imported Italian components, founder Mike Sinyard began producing Specialized’s own parts before turning its focus to bicycles in 1981 with the Sequoia and Allez models, monikers that have become synonymous with the brand and remain in existence today.

Forty years on and Specialized continues to be a dominant player in the highly contested retail and professional cycling spaces. A veritable industry pioneer, Specialized is one of a handful of manufacturers that produces its own line of equipment and components including tyres, saddles, shoes, helmets and even power meters.

Over and above its sponsorship of professional mountain biking and triathlon teams, the Morgan Hill-based company is better known for its presence in the road peloton. Here, those top pro teams play a vital role, not only in a marketing sense but also in terms of stress-testing the equipment to continually improve the recipe with pro rider insight and feedback.

On paper it’s hard to ignore the facts — Specialized road bikes have been on the winning end of nearly every major race over the past three years including the Road World Championships, the Classics and stage wins at every Grand Tour, with their most recent Grand Tour victory coming courtesy of Vincenzo Nibali’s 2016 Giro d’Italia.

In the endurance road bike segment, it’s hard to beat what the Roubaix offers in terms of comfort and speed

Named after the revered Paris-Roubaix Monument, the Specialized Roubaix has been engineered to ride faster over bumpier terrain than ever before, using Specialized’s adage ‘Smoother is Faster’.

The Roubaix features new, aerodynamic tube profiles, lowered seat stays and an aero seat post, which make it more aero than the Tarmac and on a par with the first iteration Venge in terms of aerodynamics. Specialized say this aero focus was a direct response to their pro riders demanding the aero advantages after years of Paris-Roubaix races being close to 50 kph average speeds.

It’s also more comfortable to ride thanks to the introduction of a new-and-improved Future Shock 2.0 damping system which provides 20mm of travel, plus the flexible S-Works Pavé seat post designed to further reduce vibration and keep pedalling efficient over rough surfaces.

Available in disc brake-only specification, the Roubaix can also accommodate up to 32mm tyres making it the ultimate go-anywhere, do-everything road bike.

Comfortable, light and aero, the Specialized Tarmac is one of the most popular road bikes in the world

As the all-rounder in Specialized’s range, the Tarmac offers a meld of performance and stiffness without affecting comfort.

A lot of the added compliance stems from the distinctive dropped seat stay and D-post seat post design, which together with its slimmer tube profiles, also boost aerodynamics.

The company’s FACT carbon recipe and layering techniques have reduced weight by 20 per cent over its predecessor. Another noteworthy fact is that the Tarmac’s handling characteristics remain unchanged across the sizing spectrum thanks to its ‘Rider-First Engineered’ technology.

Like its siblings, the Tarmac favours discs brakes (rim brake options are few) and all frames have a maximum tyre clearance of up to 30mm.

The third-generation Specialized Venge is the lightest version yet with dropped seat stays and shaved tubing that make for an aggressive and purposeful facade.

The current range comprises only two models for now: the S-Works Venge and Venge Pro. Honed in the company’s ‘Win Tunnel’ wind tunnel, the Venge favours speed and performance over comfort — Specialized claims the new Venge will save you 8 seconds over 40km compared to its predecessor, the Venge ViAS.

That’s not to say it’s bereft of any sense of compliance. While it may not boast the fancy suspension trickery of the Roubaix, the Venge gains added levels of comfort by way of bigger tyres and lower pressure, it can handle rubber of up to 32mm.

A crit-racing weapon even Peter Sagan thinks is cool

The Specialized Allez may not be a top-end carbon race machine but that’s not to say it isn’t any good. In fact, three-time world champion Peter Sagan and some of his Bora-Hansgrohe teammates raced the Tour Down Under People’s Choice Classic criterium using custom-painted Allez Sprint disc framesets — a move which clearly demonstrated not only the Allez’s ability as a competitive road bike but also Specialized’s long-term outlook on aluminium road bikes.

There's somewhat of a split in the Allez camp, however. The Allez Sprint is a crit-hitting speed machine that many will say gives the Tarmac a run for its money, whereas the standard Allez is a much more laid back machine that can be ridden all day long.

The Allez is a rim brake only model, whereas the Allez Sprint can be had in both disc and rim-brake spec, the Allez also utilises carbon forks across the range making it the best value-for-money proposition in Specialized’s range.

A super-fast, time-trial bike built for speed and nothing else

In terms of kerbside drama, there’s nothing quite like the Specialized Shiv. The newest iteration is even more outlandish-looking than before with a massive, wing-like fin at the rear, disc brakes and a triple-crown fork underpinning the tri-specific version - non-UCI-legal of course.

As far as UCI-legal options go, a time trial-specific Shiv TT disc is now available sporting disc brakes, super-low seat stays, an updated fork more in line with the Venge, stealthy cable routing and a one-piece cockpit design with wide, flat base bars. It was seen ridden by a number of riders at the World Championships in Yorkshire.

A go-anywhere, do-it-all bike that’s just as comfortable on the black stuff as it is barrelling along gravel roads

Specialized's latest Diverge is the third-generation and brings with it some interesting modifications to make it an even more capable gravel and adventure machine.

Geometry has been tweaked, inspired by the Epic cross-country mountain bike, by going longer lower and slacker, Specialized has enhanced the diverges composure over rough terrain. A new fork has an increased offset for steady handling at high speeds without the steering going floppy and difficult on slow technical sections.

Like the Roubaix, it utilises a Future Shock 2.0. With 20mm of progressive travel, the system uses a hydraulic dampener to absorb rough surfaces. If the gravel smooths out or there is a section of tarmac, on the fly adjustment lets you tune your ride from near-rigid to fully open.

The Diverge foregoes the dropped chainstay and instead uses a narrow solid beam of carbon to create the clearance. This makes space for ample amounts of rubber with more than enough clearance for 47mm on a 700c wheel and 2.1in on 650B. The line-up comprises a combination of carbon and aluminium models and there’s even a dropper post available on the range-topping S-Works model.

Specialized's Diverge EVO is likely to divide opinions. Some might just see a rigid mountain bike but for those looking to get as rowdy as possible on a gravel ride the Diverge EVO further blends the distinction between gravel bike and mountain bike.

The 1x specific frame takes the progressive geometry of the new drop bar Diverge and pushes the numbers further, dropping the BB, slackening the headtube and lengthening the reach by 30mm.

To all appearances, the Diverge EVO has a rigid front end but Specialized has specced its Future Shock 1.5 suspension system to reduce vibration forces and increase control.

It's you, only faster, thanks to a 240w motor that will put your club mates in the gutter for 80 miles

Rather than simply using a Roubaix as the base and forcing a motor into it, Specialized built the Turbo Creo SL from the ground up. Specialized wasn't satisfied with how much the Bosch or Shimano e-bike systems weighed so designed its own, the SL 1.1 drive system, which is claimed to weigh 1.96kg. The 480wh battery adds another 1.8kg, and the total weight for the Expert model is 13.5kg.

Depending on usage, the range is around 80 miles (130km), however, the S-Works or Founders Edition comes with a bottle-shaped range extender for a further 60wh of battery life.

The Turbo Creo SL features the Future Shock 2.0 upfront - more commonly seen aboard a Roubaix. All models come with a high-spec finish, with the cheapest option - the Expert - being made from Fact 11r carbon, with hydraulic disc brakes, Roval C 38 wheels and an Ultegra Di2 groupset.

There is also an EVO version, which is the typical Creo, but with added gnar - making it gravel ready for those who want a bit of off-road assistance.

Specialized’s range of bicycles differs in geometry, material and function. As such, the model line-up caters for a diverse cycling demographic including men and women, professionals and amateurs, as well as adventure/gravel riders.

Frame types include geometries specific to aero, endurance, climbing, time trial and even gravel grinding, the latter of which has recently become a popular pastime among professional road riders.

Interestingly, when the company launched its Roubaix model, Specialized committed to gender-neutral bikes in terms of geometry, sizing, name and designs going forwards. Through their proprietary bike fitting company Retul, Specialized discovered that there is just as much chance of a difference in leg and torso length between two men, as there is between a man and a woman.

The company will simply offer a wider range of sizes in unisex models going forward, while more obviously gender-specific goods such as saddles and clothing will become available.

Specialized’s road models are ranked from entry-level through to range-topping S-Works and are available with frames made from carbon or aluminium. As far as the disc/rim brake debate goes, Specialized remains a proponent of disc-brake actuation with their pro teams exclusively using the technology in races — however, rim-brake options are available on certain models as framesets only.