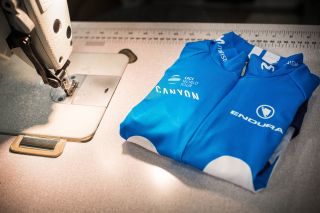 Endura has announced that its partnership with Movistar will come to a close at the end of 2019. The partnership that spanned six years and saw more than 180 race wins will terminate at the end of the 2019 season, with the company citing a UCI-enforced "developmental dead end" as the main reason for stepping away from the WorldTour.

In a statement published on the company website, Endura complained that "progress in technical apparel is limited by the governing body and the prize for innovation is seeing technological advances banned. Endura reached a fork in the road and have chosen to avoid the developmental dead end currently being enforced by the UCI."

Endura's first partnership with a team came when it joined with local bike shop Pedal Power, an outfit that grew into the successful Continental squad Endura Racing. They subsequently partnered with NetApp to form Pro-Continental outfit 'Team NetApp-Endura. Success followed again with a stage win at La Vuelta and a Tour de France wildcard, but Endura looked up the ladder once again, a search that led to discussions with Movistar.

The partnership with Movistar was formally announced at the team launch ahead of the 2014 season,  and innovations followed in the six years of their collaboration. Endura worked with Drag2Zero's Simon Smart on aerodynamics, including countless hours of wind tunnel testing, computer modelling, and a 3D printed replica of Nairo Quintana. The culmination of this work saw the creation of Silicone Surface Technology, which featured in team kits used by Movistar and Bigla in 2018, but was subsequently banned by the UCI in early 2019.

This banning of technology seemingly marked the beginning of the end for Endura's WorldTour presence, who have decided to step away from the top level of the sport. The Scottish company will continue to work with Drag2Zero and focus on triathlon, where technological development is less constrained, although Endura doesn't rule out a return to the pro peloton in the future.