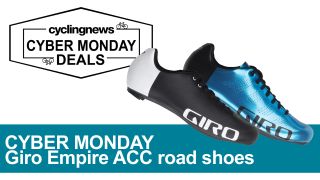 The Giro Empire reintroduced laces to road cycling, and over the years they have become some of our favourite riding shoes. For Black Friday, Jenson USA slashed 72 per cent off the RRP, a deal which remains available into Cyber Monday. There are two colours, and sizes range from EU39 - EU47, for only $84.99.

Giro initially developed the Empire for Taylor Phinney to use at the 2012 Giro d'Italia and that year's London Olympic Games, and they have since found their way onto the feet of riders ranging from Grand Tour winners, to hipsters, to weekend warriors. Not only that, the Empire inspired almost every other shoe brand to launch a similar lace-up model.

The sole is made from Easton's EC90ACC carbon fibre and sees a stack height of 6.5mm. The upper is a seamless material that Giro calls Premium Evofiber – a perforated microfibre material that looks and feels like leather, but is surprisingly breathable and doesn't stretch in the wet.

Inside, Giro includes its SuperNatural footbed, complete with adjustable arch support and the shoes are claimed to weigh 215g in size 42. Even better, you can have a pair for less than a Benjamin on Black Friday and into Cyber Monday.

Deals galore are to be had this weekend, so don't miss out! Check out our round-up of the best Cyber Monday bike deals for even more discounts.