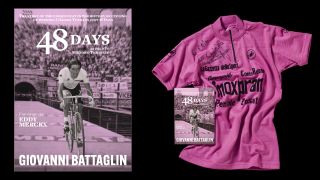 On July 22, Giovanni Battaglin turned 69 years of age, and the Italian has marked the occasion with the launch of a new memoir, 48 Days, which will be made available on August 1.

To celebrate this single day in the calendar, Battaglin is looking back over a longer period of 48 days. Specifically, the 48 days that separated April 21 and June 7 in 1981.

Throughout these dates, Battaglin saw the highlight of his career as a professional cyclist. Riding for Italian outfit Inoxpran, he took victory in both the Vuelta a España and the Giro d'Italia with little more than a two-day break in between.

His new book details the full story of his Grand Tour double, as well as sharing highlights from his wider career.

"The project of writing a book about those 48 days and 7,500 km in the saddle has been in my mind for several years," said Battaglin.

The Italian is one of three riders to have won both the Giro and the Vuelta in a single season, alongside Eddy Merckx, who achieved the feat in 1973, and Alberto Contador in 2008. He is one of 10 riders to have stood atop any two Grand Tour podiums in a season, but no rider can match the short time frame in which Battaglin took his double.

1981 was a unique year in which the Giro started just three days after the end of the Vuelta, which, until it was moved to autumn in 1995 to prevent direct competition, took place in April.

Coincidentally, the unprecedented mass-postponement of events in 2020 will see the Giro and Vuelta overlap in a compacted calendar that will also see the two Grand Tours clash with Paris Roubaix.

And fittingly, 48 Days will be available as of August 1, the same day that the 2020 season is set to restart in Italy, at Strade Bianche.

For avid collectors, there will be 150 Edizione Collezionista (Collector's Editions) made available, which will be signed by Battaglin himself, and come with a replica of the 1981 maglia rosa made by Castelli, complete with Inoxpran branding and sponsors' logos.

The book's foreword sees a special appearance from Battaglin's long-standing rival and friend, Eddy Merckx. The Belgian wasn't there in 1981, having retired three years prior, but the two went toe-to-toe on multiple occasions throughout the 1970s.

"I’m very happy that Eddy took part in this project," explained Battaglin. "That’s how things were in the peloton back when I raced. There were a lot of rivalries, sure, but there was a lot of genuine respect, too. The riders were fierce competitors on the bike, and friends off the bike."

The healthy competition likely remains ongoing today, albeit in a different sense, as both have entered the world of bicycle manufacture. Eddy Merckx's best road bikes are ridden by today's WorldTour outfit AG2R La Mondiale, while Officina Battaglin makes a range of steel road bikes, including the Power+ EVO, which is the first to pair an integrated cockpit with a steel frame.