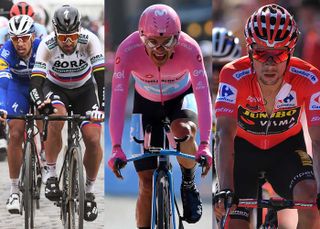 Paris-Roubaix, the Giro d'Italia and the Vuelta a España on the same day? (Image credit: Getty Images Sport)

The new post-COVID-19 lockdown race calendar announced by the UCI has caused a headache for race organisers and will stretch teams' rosters and test riders' fitness, but it has created a unique and historic Super Sunday of racing for October 25, with some of the most important racing of the year packed into a few hours.

Late October usually marks the end of the European racing season but this year October 25 will be one of the high points of the season, with the men's and new women's Paris-Roubaix, the final stage of the Giro d'Italia to Milan and the queen stage of the Vuelta a España to the summit of the Tourmalet all raced on the same day.

The calendar clash has quickly been dubbed as cycling's Super Sunday, evoking the name given to the match days when major football matches are held on the same afternoon.

Each race offers something special.

The final stage of the Giro d'Italia will crown the winner of this year's Maglia Rosa via a 16.5km individual time trial to the centre of Milan. In 2017, Tom Dumoulin snatched the overall victory from Vincenzo Nibali and Nairo Quintana in Milan and a similar scenario is possible this year. The time trial comes 24 hours after a mountain stage that climbs the Colle dell'Agnello and Col d'Izoard before finishing at Sestrière.

There has not been a rain-soaked Paris-Roubaix since 2002 but local meteorologists are already predicting a higher chance of rain for the October 25 Hell of the North. The addition of the first ever women's Paris-Roubaix will also spark extra attention for the cobbled farm tracks of northern France and make for a historic day for women's cycling.

The Vuelta a España is the final Grand Tour of the post-COVID-19 lockdown season, overlapping with the Giro d'Italia by six days. It is scheduled to start in the Basque Country on Tuesday October 20 and end in Madrid after 18 stages on November 8, bringing down the curtain on the 2020 men's WorldTour. Stage 6 is the queen stage of the race, with the mountain finish atop the Col du Tourmalet in the Pyrenees.

The Zonhoven Superprestige cyclo-cross race is also planned for October 25 and unless the Belgian event decides to change dates to avoid the log-jam of racing, there could be five major races all squeezed in to one day.

Some races have always overlapped in cycling but nothing like on this Super Sunday. Fans my have to make some difficult choices about which race they watch live and be ready to spend most of the day on the sofa if they want to watch or follow all of the racing.

The race organisers may opt to change their race schedules to avoid races finishing all at the same time on Sunday afternoon but they have yet to strike a deal after squabbling over race dates.

However, a day-long feast of major racing is possible. The Vuelta a España stage is only 135km long and so could be held in the morning, while the Giro d'Italia time trial could end could be crowned at lunch time, leaving the afternoon for the men's and women's Paris-Roubaix.