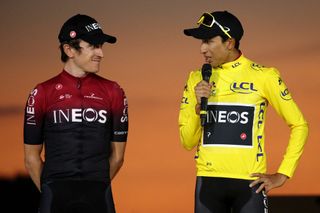 With the Tour de France and the rest of the 2020 calendar now full rescheduled, thoughts will turn once again to the seemingly perennial Team Ineos leadership dilemma, and on Thursday Egan Bernal issued what was seen in the Colombian media as a ‘warning’ to his teammates Chris Froome and Geraint Thomas.

Speaking to Alberto Contador on Eurosport España, Bernal trotted out the customary party line that 'the road will decide' but also spoke strongly about his own status and how he’s not prepared to simply sacrifice himself and "throw away an opportunity" to win another yellow jersey.

Bernal became the youngest Tour winner in more than 100 years when he triumphed last year, with 2018 winner Thomas forced to settle for second place. Both will target the Tour once again this year, along with four-time winner Chris Froome, for whom the postponement to late August is an advantage in the context of his comeback from the injuries that kept him out of last year’s Tour.

"I clearly understand the team in this situation. For them, let’s say, it could be interesting to win a fifth Tour de France with Chris, or another Tour with Geraint Thomas. At the end of the day, they are two British riders, and it’s a British team, and that’s something important for them, so I understand, let’s say, the position of the team," Bernal said.

"But I also put myself in a position. I’m young, I’ve already won one Tour de France, and I’m not going to throw away an opportunity to win another Tour de France, that’s for sure. That I would sacrifice myself, being at my 100 per cent… I don’t think I’m going to do that, nor will he, nor will anyone."

Bernal also confirmed he will focus squarely on the Tour de France, dismissing the idea of planning to go on and ride the Vuelta a España in late October and November.

With Bernal resolute in his own position, and aware that Froome and Thomas are the same in theirs, something will have to give at some point on the road of France in September.

The 22-year-old insisted that, first of all, it will depend on the condition each riders takes to the start line in Nice on August 29 after a most unusual spring and summer, after which the race circumstances will have the final say.

"Once the first stages are out of the way, we’re quickly going to see what position Froome’s in, what position I’m in, and what position Thomas is in, and little by little the outlook will be clearer. In this moment in time, even as the last champion of the Tour, I can’t go to the team and tell them I’m the only leader, because, as I said, I understand there’s Froome and Thomas and I understand the position of the team.

"At the moment, it’s a question of having a cool head, focusing on training, trying to do things as well as possible, get to the Tour and then things will fall into place."