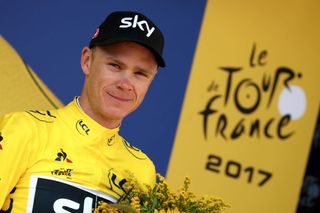 Chris Froome has revealed he has done several 30-hour weeks of indoor riding during the COVID-19 pandemic, fired by the ambition of trying to win a record fifth or even sixth Tour de France and so make one of the sport's greatest comebacks.

Froome revealed in a series of interviews that he finds inspiration in the photographs of the serious injuries and fractures he suffered when he crashed into a wall while studying the route of the time trial at the Critérium du Dauphiné last June.

He has no memory of the moment of the 70kph crash, but his long recovery and return to the saddle via months of rehabilitation, follow-up surgery, pain and personal sacrifice appear to have made him more resilient and more determined than ever.

Froome will turn 35 on May 20, so an eventual fifth Tour de France win would make him the second-oldest winner in history, but he seems rejuvenated, in spirit, if not in body. His crash ended any hope of a fifth Tour de France victory in 2019 but his comeback is fueling his future ambition.

"My dream, when I retire, would be to have won more Tours de France than anyone else," Froome told French newspaper L'Equipe.

"It would be the perfect scenario, but I know there is still a lot of work to make it come true."

Froome was able to ride his bike before he could walk and spent six months working to rebuild his broken bones and lacerated muscles in his personal pain cave. Strict lockdown in France has been an extra opportunity to get back to near full strength, while his rivals had to ease back and were unable to race hard in the spring.

If and when racing resumes in July and the Tour de France can be held safely between August 29 and September 29, Froome wants to be ready to compete for victory. He is working with the belief that in 2020 he can become the fifth rider to win five editions of the Tour de France.

An eventual victory would be one of sport's greatest comebacks, arguably up there alongside Greg LeMond's return to victory after being shot and Niki Lauda's return to Formula One motor racing after surviving a terrible crash and time in a coma.

"It would be massive," Froome said to the Times, the Telegraph and La Gazzetta dello Sport in a combined interview carried out via Zoom. "It would definitely be one of the biggest comeback stories in sport.

"Given recovery has been successful and my track record, that’s the plan. I’d like to think that chances are I can do it. Nothing is written in stone, or given in sport, but I’ve got the experience, loads of motivation and I want to make it happen obviously.

"Going through what I have been the last year, it did give me a lot of time to think. Looking at other athletes who have been through similar experience and come back stronger I can understand why now. It gives you a whole new perspective on your career and racing. In cycling we saw [Alejandro] Valverde break his leg in the Tour, come back and the following season he ended up world champion.

"Hopefully people will write me off a little bit after the crash and I think they have written me off to some extent. That could be to my advantage as well. Every time I have come up against adversity it has always pushed me harder."

Froome looked though images of injuries during his interviews, clearly finding inner strength in the pain of the photographs.

"Looking at those now they are hugely motivating for me," he said. "Some pretty grim, gnarly pictures, bits of bone sticking out. They are a reminder of how far I have come in the last few months.

"It’s stuff that I had almost put out of my mind but it’s pretty motivational thinking that was less than a year ago and now I am back in full training mode and hoping to win a Grand Tour this year. It’s an amazing contrast."

Ready for the Tour de France

Froome is convinced he will be ready to race the Tour de France in late summer but accepts it could be a very different event, held somehow behind closed doors, with limited crowds along the route and riders in a protective bubble to reduce the risk of sparking cases of COVID-19 in the peloton and amongst the public.

"Huge crowds coming together isn’t going to be allowed or expected for the foreseeable future, certainly in Europe," Froome said. "Better to have a limited version but at least run a race that everyone can enjoy and be safe."

Froome's original pans to return to form in time July were hit by an infection and several weeks off the bike after surgery in November to remove the metal plate in his hip. He acknowledges that the suspension of all racing and the September dates for the Tour de France give him a chance to catch up and perhaps compete on an equal footing with his biggest rivals and his Ineos teammates vying for protected leadership status at the Tour de France.

"From a very personal point of view, it's an advantage to have more time to prepare for the Tour, to come back from injury, but it is not something that I will celebrate, with all the difficulties that people have to face, from a health point of view but also from an economic point of view," he told L'Equipe.

"If I compare to previous seasons and look at where I was in April last year, I would say that I am in a similar situation, so it is very encouraging for me."

"This [delay] has just bought me a little bit of extra time to make sure that the right leg, that right side of the body, is firing properly before I really load it up,” Froome told the Times.

The power numbers Froome can produce on his home trainer are "pretty much bang on where I would be at this time of year in a normal season", even if they are some way from the biggest loads on an altitude camp or during the ultimate test of racing. However, Froome is ready for phase two, when France perhaps ends its strict lockdown on May 11 and he can return to training outdoors.

"I’d say the recovery process is fully finished. What remains now is to return to that top fitness where I’m capable of winning races," he said.

A new contract with Team Ineos

Froome is chasing victory for personal reasons and professional needs. His contract with Team Ineos ends this year and a new deal has yet to be agreed.

Froome is unlikely to leave Team Ineos but victory at the Tour de France would no doubt secure him another multi-million pound contract and a clear leadership role for 2021 and beyond, alongside Egan Bernal and Geraint Thomas.

"I don’t feel I am anywhere close to retiring,” Froome said.

"I look forward to racing at least a few more seasons. I don’t have a contract beyond this season but with everything that’s been going on this last couple of months I don’t think it’s top of the agenda for me at the moment. I am sure when I get back to racing I will move things forward in terms of coming up with an agreement."