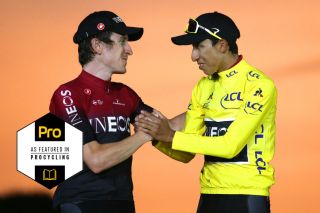 This is an extract from the cover interview with Geraint Thomas from the May 2020 edition of Procycling , out now and available to buy here.

There is virtually nowhere on the planet out of the reach of coronavirus. And as Geraint Thomas is at pains to point out, he is acutely aware that, in the bigger scheme of things, the importance of the Tour de France, cycling and sport in general are all eclipsed by the gravity of the pandemic.

But in almost everybody’s personal careers and lives, too, coronavirus has thrown a spanner in the works this spring and, in Thomas’ case, his professional worries centre on this season.

Procycling May issue out now

What makes those concerns far more intense for the Welshman, too, is that 12 months after he was standing on the Champs Elysées podium receiving the final yellow jersey of the 2018 Tour, he abruptly found that - as he puts it with refreshing honesty to Procycling - he’d become "yesterday’s man".

In one way, as he says, he could see it coming, particularly given how much of a breakthrough Egan Bernal’s victory represented, which, as the third British winner in a decade, his arguably did not.

"That’s how sport works, isn’t it? Egan was the second youngest Tour winner in - what was it - 100 years? And the first Colombian ever; it was massive for them."

And of course, Bernal was a teammate, not an out-and-out rival, which considerably softened the blow of losing.

But, in another way, it seems that for Thomas, almost as much as winning in 2018, finishing second in the Tour in 2019 was another pivotal moment, one when he had a good hard look in the mirror to decide what he wanted to do in the rest of his career - or at the least, how he’d get to stand tallest in Paris again.

Because, as Thomas puts it, "I was a bit, like, 'oof'. That feeling of winning was unbelievable."

Taking second in theTour after previously finishing first, he says, "does spur you on to come back and win it. Not in a way of being against Egan, or anything like that, but it does. It makes you hungry."

He continues: "We’re all competitive, that’s why we do it, because we want to win. Maybe if I was thinking, 'That’s it, I’ve won the Tour, just enjoy it now', that’d be when it’s time for me to stop, or take it easier."

Being ousted from the top spot was unprecedented for him, too, Thomas points out, because "I’ve always had the fortune of being the up-and-coming one."

When he found the boot was on the other foot, he adds drily, "Maybe that was when I realised I’m getting old."

This is an extract from the cover interview with Geraint Thomas from the May 2020 edition of Procycling magazine, out now and available to buy here.