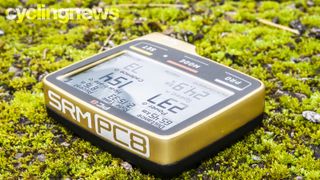 Check out Bike Perfect for the best mountain bike buying advice to help you get more from your riding, no matter your level.

The Musette is Cyclingnews’ roundup of some of the world’s best cycling gear. We’ll take a look at pro-level equipment, bikes and components, alongside some of the most desirable garments and newest accessories in the sport.

Scroll down for a look at SRM's performance-focused PC8 cycling computer, Vision's Trimax 45 clincher wheels, some time-trial trickery from Endura and a new carbon perch from Repente.

SRM is considered the global authority when it comes to power meters, having forged a reputation in the pro peloton as the go-to data-harvesting tool of choice for the past three decades.

Any ardent followers of WorldTour cycling will recognise the SRM PowerControl, a unit which has adorned the handlebars of pro cyclists such as Greg Lemond, Bjarne Riis, Jens Voigt and more recently Caleb Ewan and Vincenzo Nibali. Its squared-off dimensions complete with bold, anodised colour schemes have become a hallmark feature and given it an unmistakable presence.

The SRM PC8 may have replaced the PC7 back in 2014 but it's aged impressively well during this time, both from a visual and technological point of view. The most significant hardware step-ups over its forebear comprised GPS, WiFi, Bluetooth 4.0, ANT+ and an accelerometer - nothing particularly revolutionary no, but the PowerControl has never claimed to compete with Garmin and Wahoo or any other GPS computer on the market for that matter.

But before you dismiss the PC8 as a cycling computer based purely on its lack of navigational prompting, you should remember it's been designed as a performance-metric-monitoring device and nothing else. What this means is that the SRM PC8 caters for the number crunchers - cyclists obsessed with data harvesting. Yes, the interface and usability take some getting used to - almost bordering on counter-intuitive upon initial set-up and use - and there are just three buttons that control a plethora of screen functions, but everything works. No gremlins here.

SRM has made screen customisation a relatively easy exercise by introducing a smartphone app (the PC8 mobile app) to populate performance metrics and data fields. It's very easy and allows the user to tailor their screen, of which there are four variations. The display is pretty basic: black and white, and is controlled by a light-sensitive backlight but it works. The PC8, however, doesn't need the extra garnishing, touchscreen functionality, colour screen and gimmicks of its rivals - it's a prime example of the less-is-more philosophy and we like that very much.

Some of the technical highlights include on-board memory of 500 MB (4000 hours data storage), a built-in motion sensor which automatically turns on the PC8 when movement is detected, a magnetic charger that is interchangeable with all SRM power meters as well as up to four different bicycle profiles. From a connectivity point of view, rides can be uploaded wirelessly to third-party apps such as Strava and Training Peaks. It's also compatible with all ANT+ power meters, not just SRM units.

But of all the features, we particularly love the customisable, anodised aluminium chassis, which is available in ten different colours. Customers have the option of speccing the unit in their desired colour as well as choose between eight different designs for the sides including flags and other ornate graphics. - Aaron Borrill

Vision is one of the oldest proponents of carbon wheel technology with a lineage that dates back to the 90s. The Trimax 45 wheelset pictured here is the American company's latest offering which aims to kill two birds with one stone - in this case doubling up as both a triathlon and road wheel solution.

Dubbed as a carbon alloy clincher, the Vision Trimax 45 wheelset combines the aero properties of a 45mm deep section rim with an alloy braking track for improved stopping power and longevity. The entire rim is manufactured from aluminium and merely wrapped in a carbon-fibre sheath for added stiffness. Vision calls this 'Carbon Structural Integration' or CSI.

Visually the Trimax 45s are refined-looking wheels and the exposed carbon weave does well to offset the logo graphics and alloy brake track. The wheels are built and laced up by hand utilising straight-pull Sapim aero spokes – 16 at the front and 21 at the rear. The complete wheelset tips the scales at 1750g which is par for the course (805g front, 945g rear). Both hubs are constructed from aluminium and are compatible with 9/10/11-speed Shimano/SRAM cassettes.

With an internal rim width of 17mm (22.1mm external) they're not the widest wheels around but this has done little to negatively impact straight-line performance and cornering speed. That said, the ride quality is quite hard - particularly on abrasive road surfaces.

Despite the 45mm profiling, the Trimax wheels fare pretty well in cross-winds, tracking predictively and requiring very little in the way of correction. Of course, the big question around wheels of this nature is just how well they perform in a straight line. In short: they're fast and definitely improve speed -  both in terms of top-end and being able to maintain momentum on the flats and along rolling topography.

For now the Vision Trimax 45 wheels are only available in a rim-brake guise which should give solace to purists still holding out from joining the disc-brake revolution. Priced at £734 / $946 / Au$1383, the Trimax 45s are a fair whack cheaper than its rivals and well worth a look for anyone wanting to boost their performance. - Aaron Borrill

Free speed. It's a term that many cyclists - regardless of ability - will throw about on group rides as if it really exists. But if truth be told it doesn't. You need to pay for it and the greater the edge the more you'll have to pay. Enter Endura.

Endura has been at the forefront of the development of go-faster kit, having produced skin suit technology so slippery the UCI banned it from all sanctioned races; a decision which indirectly led to the Scottish-based company parting ways with Team Movistar and WorldTour cycling altogether.

To achieve this the suit employs a decorative yet fully functional series of 3D-printed silicon chevrons called 'Surface Silicone Topography'. These are strategically placed to positively manipulate the airflow around the body and reduce drag, particularly at speeds of 45kph or higher.

To further boost your performance and wind-cheating form, Endura also offers an aero-optimised helmet called the Aeroswitch. Doubling up as both a TT and road helmet (it's got a removable tail) the Aeroswitch offers greater versatility than its rivals. The helmet is built upon an internal honeycomb-like structure called Koroyd which supplies better safety and cooling properties than a standard foam helmet. The Koroyd material has also helped minimise the frontal area for better aerodynamics. Another highlight is the detachable, magnetic visor designed to offer better visibility when in an aggressive TT position.

While the suit may initially feel uncomfortable when standing, it only really starts to make sense when in an aero position on the bike. With the local UK club TT season all but over I'll only be able to report on the efficiency of this combo come early spring next year. - Aaron Borrill

The Repente Latus CL is aimed at performance-minded cyclists who require a wider saddle; riders whose ischial tuberosities - sit bones to you and me - are farther apart and for whom a 130mm saddle is akin to a razor blade. However, fortunately, it also follows the recent trend of short-nosed saddles, with which this writer has found plenty of success.

At first appearance, primarily due to the short nose, the saddle certainly looks very wide, but given I usually fall between 147 and 155mm, I trusted the 152mm Latus would be anything but uncomfortable. Of course, saddle comfort is an entirely personal matter, so my own experience of comfort is likely to be of little use to you, however, as a cyclist who finds seating-success in a 147mm Specialized Power, the transition to the Repente Latus CL has been seamless.

The Latus CL is only available in the 152mm width, however, the Repente carbon-railed range does feature a number of narrower options. Their 140mm Magnet is a narrower short-nosed saddle, and the Kuma, Comptus and Aleena models offer more traditional shapes.

The Latus CL features a flattened rear surface which, according to Repente, is designed to increase support for those with "very far apart sit bones". The centre channel is claimed to ease pressure on the perineal area, and the curvature between front and rear has been designed to guarantee freedom of movement and reduce inner thigh chafing.

After 400km of use, I would agree. The Latus CL would be optimal for someone with wider sit bones than I possess, but due to the short nose, there has been little in the way of discomfort.

At 145g (quoted), the weight is very competitive against its peers. For example, the 155mm S-Works Power tips the scales at 151g and the 152mm Pro Stealth at 179g. The material is a water-based microfiber/PU, which thanks to show-room polish, initially had a bit of slip and slide, but 20km later was as secure and supportive as necessary.

At EUR 219.00 (approx £189 / $240), it's aimed at those who are looking for a premium product, and if it wasn't limited to just one size, it would be a sure-fire inclusion in our guide to the best road bike saddles. - Josh CroxtonView Deal

Check out Bike Perfect for the best mountain bike buying advice to help you get more from your riding, no matter your level.