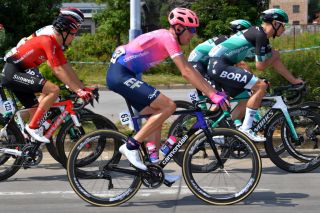 British climber Hugh Carthy has signed a contract extension that will keep him with US WorldTour outfit EF Education First until at least the end of the 2021 season, the team has announced.

The 25-year-old had a true breakthrough season in 2019 – his third with the team – riding aggressively at the Giro d'Italia before taking a solo stage win at the Tour de Suisse in June after being out in front for almost the entire stage. However, his season was then interrupted by a crash at the Vuelta a España in August, in which he broke his collarbone.

Carthy recovered to return to racing at the Giro dell'Emilia in October and rode the autumn Italian Classics, including Il Lombardia, before bringing an end to his season at the recent Tour of Guangxi.

He told Cyclingnews at the Chinese stage race earlier this week that he thought he'd "taken a step forward" this year, and that more Grand Tours and possibly the hilly Olympic road race are likely to be on his radar in 2020.

"Winning my first WorldTour race with the team, that's probably one of my stand-out moments," Carthy said of his successful 2019 season in an EF Education First press release on Thursday. "There have been a lot of nice moments that led up to that moment, where the team have shown support and faith in me, and that's really nice.

"Mentally, I didn't think I'd changed too much, but then I had a break and went back home and saw family and friends, and it sank in a bit more,” said Carthy, who comes from Lancashire in the UK.

"But then when you return to Europe, you forget about it a bit, and it's like you're back to square one – you just want to get out and race again," he said, demonstrating his no-nonsense approach to racing that has encouraged EF Education First team manager Jonathan Vaughters to secure Carthy's services for the next two years.

"Hugh’s spectacular win at the Tour de Suisse convinced me that he's a very special type of talent," said Vaughters. "He's an emotional and passionate racer. His 100-kilometre solo ride in Switzerland was evocative of the big mountain raids we used to see in the 1970s and 80s. He's exactly the type of rider we want on this team."

Head sports director Charly Wegelius agreed that the team has something special in Carthy.

"Hugh has made some crucial steps in his progression this year," added Wegelius. "He's proving to himself and the world that he can not only be present at the highest level, but also win.

"This has given him the reassurance that he needed, that he is on the right track. There is still a long way to go until we find out where the ceiling is for Hugh, and I'm delighted that we can continue this journey together," he said.