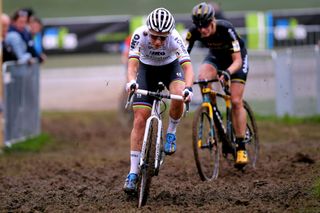 Round 3 of the Superprestige cyclo-cross series takes the riders to Gavere, just outside Ghent, Belgium, on Sunday, October 27, with the elite men's overall leader Quinten Hermans (Telenet Baloise Lions) and elite women's leader Sanne Cant (IKO-Crelan) looking to protect precarious leads at the top of their respective standings.

Round 1 winner Eli Iserbyt (Pauwels Sauzen-Bingoal) is set to return after opting to sit out round 2 in Boom in order to stay fresh for the following day's World Cup in Bern, Switerland, which the Belgian duly won to retain his overall lead.

However, with the World Cup now taking a break until round 4 in Tabor, in the Czech Republic, on November 16, Iserbyt can concentrate on trying to take back his lead in the Superprestige series.

He's likely to be pushed hard by Hermans' Telenet Baloise Lions teammate Toon Aerts, who won round 2 in Boom last week, while Britain's under-23 world champion Tom Pidcock (Trinity Racing) appears to have found his cyclo-cross legs and took third at the Superprestige last week in what is his first full season of 'cross at elite level.

In the women's race, Cant will have to protect her one-point lead over Creafin-Fristads' Eva Lechner, while Ceylin del Carmen Alvarado (Corendon-Circus), winner of the opening round of the Superprestige series in Gieten, in the Netherlands, two weeks ago, is only one more point behind in third place overall.