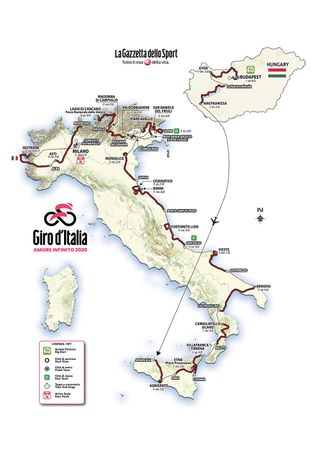 The route for the 2020 Giro d'Italia (Image credit: RCS Sport)

The route of the 2020 Giro d'Italia has been presented in Milan, with the 103rd edition of the Corsa Rosa including 58.8km of individual time trials but also a monstrous high-altitude final week that includes Monte Bondone, Passo dello Stelvio, Colle dell'Agnello, Col d'Izoard in France, and mountain finishes at Piancavallo, Madonna di Campiglio, on twisting roads up to Laghi di Cancano above Bormio and finally to Sestriere.

The Giro d'Italia 2020 starts in Budapest on Saturday, May 9 with an 8.6km individual time trial with the winner of the maglia rosa crowned in the centre of Milan on Sunday, May 31 after a flat and fast 16.5km individual time trial. After three stages in Hungary, the race flies to Sicily for three stages on the island before a long ride north via the Adriatic coast. The black ashen slopes of Mount Etna will host the first mountain finish on stage 5, with a long and steep final climb to Camigliatello Silano in Calabria also an early test for the overall contenders.

The 2020 Giro d'Italia will also give the sprinters something to aim for, with bunch finishes expected on stage 2 to Györ and stage 3 to Nagykanizsa in Hungary, stage 8 to Brindisi, stage 11 to Rimini, stage 13 to Monselice and even the 251km stage 19 to Asti in Piemonte for those who survive the mountains.

Other stages to the Greek temples of Agrigento and along the Adriatic coast include some short, steep climbs but could also suit the likes of Peter Sagan (Bora-Hansgrohe), who was in Milan for the presentation and confirmed he will ride the Giro d'Italia for the first time in his career in 2020.

While the 2020 Tour de France has just a final 36km individual time trial to La Planche des Belles Filles, steep climbs and shorter stages, the Giro d'Italia follows a more traditional Grand Tour route, with five stages over 200km in the final week, three of which will include over 5,000 metres of climbing. The total race distance is expected to be above 3,579.8km, with close to 45,000 metres of climbing during the 21 stages.

The 33.7km time trial in the Prosecco vineyards above Conegliano on stage 14 and the final 16.5km time trial to Milan may appeal to Tom Dumoulin,  Primoz Roglic (Jumbo-Visma) and Geraint Thomas (Team Ineos). The Welshman's new teammate and 2019 Giro d'Italia winner Richard Carapaz was at the route presentation and is expected to again target the Corsa Rosa. Vincenzo Nibali was unable to attend the route presentation due to a get together with his new Trek-Segafredo team in the USA. However he is expected to fly the flag for Italy and ride the Giro d'Italia before focusing on the Tokyo Olympic Games road race in late July, and the hilly World Championships in Switzerland.

The Giro d'Italia will start outside of Italy for a 14th time with the Grande Partenza and the opening three stages in Hungary. The opening 8.6km individual time trial on May 9 will start from Heroes’ Square in Budapest and follow a route along the Danube before entering the old city and climbing to the finish in the Castle district.

The final ascent of 1.5km with an average gradient of 4 per cent will be the first classified climb of the Giro d'Italia and reveal who pulls on the first maglia rosa.

Stage 2 is a 195km leg from Budapest to Györ that this perfect for the sprinters. The largely flat course is broken up in the finale by the short climb to the abbey at Pannonhalma 22km from the finish before a flat and fast run-in to Györ.

Stage 3 from Székesfehérvár to Nagykanizsa is also flat, with time bonuses perhaps changing the race leader. All three stages seem to offer Peter Sagan a chance to shine close to Slovakia and his hometown of Zilina.

No rest before the opening week in Italy

UCI rules now limit early rest days during Grand Tours and so riders will immediately fly to Sicily after Monday's stage to Nagykanizsa and then race the 136km stage from Monreale to Agrigento on Tuesday. Agrigento hosted the 1994 World Championships, when Luc Leblanc won the rainbow jersey for France and the rolling stage will finish in the shadows of the stunning Greek temples.

The riders will climb Mount Etna from the little known Linguaglossa northern side on stage 5. The twisting 18km climb rises at between six and seven per cent and ends with three kilometres above 10 per cent.

After a ferry transfer to the Italian mainland, the 223km sixth stage climbs 22km up to Camigliatello Silano to begin the long ride north, with sprint finishes likely in Brindisi and Vieste before the first rest day on the Abruzzo coast after nine days of racing.

The second week begins with a hilly finale before the finish in Tortoreto Lido di 212km, a flat stage to Rimini to celebrate the 100th anniversary of the birth of film director Federico Fellini.

Stage 12 starts and finishes in Cesenatico, and as well as remembering Marco Pantani, it celebrates the 50th anniversary of the Nove Colli Gran Fondo, considered one of the first mass participation races. As the Nove Colli name suggests, the stage will cover a series of short but steep climbs. RCS Sport have signaled the stage with four stars, indicating it will be a hard 205km in the saddle.

The race jumps north to the Vento region for the key stage 14 time trial in the Prosecco vineyards. The 33.7km stage is similar but shorter than the time trial in the 2015 Giro d'Italia. It includes the steep ramp up the Ca’ del Poggio climb which averages 12.7 per cent and has a section at 19 per cent, and ends with another climb before the finish in Valdobbiadene.

In another novelty, stage 15 will start in the Rivolto Italian air force base near Udine to celebrate the 60th anniversary of the creation of the Frecce Tricolori aerobatic jet team. The fight for overall victory will take off here, with three nasty climbs before the mountain finish in Piancavallo, where Marco Pantani won in 1998.

The big finale in the high mountains

The second rest day on Monday, May 25 is the final chance for the overall contenders to freshen up before the Giro d'Italia climbs into the high mountains for the grand finale.

Stage 16 is packed with short climbs on the road to San Daniele del Friuli before a hard ride west over the Forcella Valbona, Monte Bondone and the Passo Durone before the climb up to Madonna di Campiglio. The 202km stage is the first of three mountain stages with over 5,000m of climbing.

Stage 18 from Pinzolo to Laghi di Cancano is arguably the Queen stage of the 2020 Giro d'Italia. It starts with the little known Campo Carlo Magno and Passo Castrin climb and then tackles the legendary Passo dello Stelvio, via the twisting hairpins from the east.

The Passo dello Stelvio will award the Cima Coppi prize as the highest climb of the 2020 Giro d'Italia before a fast descent to Bormio and the climb up to Laghi di Cancano. The narrow roads twists up the side of the mountain much like the Lacets de Montvernier climb that featured in the 2015 Tour de France. The former military road cuts through the rocks via a series of tunnels and turns to a gravel road for the final kilometres. It is perhaps the Giro d'Italia's response to the Tour de France and Vuelta a España, offering dirt roads, spectacular climbing and after some legendary climbs and 200km of racing.

The 251km flat stage from Morbegno to Asti is a pure transfer stage, taking the Giro d'Italia west to the Alps for the final showdown. Stage 20 from Alba to Sestriere also climbs over 5,000 metres during a distance of 200km. It starts with the 21.3km Colle dell’Agnello. The summit marks the Italy-France border and is at a breathless 2,744 metres, and was last climbed in 2016 when Vincenzo Nibali went on the offensive over the top and Steven Kruijswijk crashed into a snowbank and lost the maglia rosa.

The Col d’Izoard comes next, with the Giro d'Italia returning to the iconic Casse Desert and 2,360 metres high French summit after a 13-year absence. The Giro has crossed into France and conquered the Col d’Izoard on seven previous occasions, most notably in 1949, when Fausto Coppi was first to the top during his famous solo raid between Cuneo and Pinerolo. The stage descends to Briancon and climb the Col de Montgenèvre to return to Italy for the climb up to the finish at Sestriere.

It was rumoured that the Alpine finale would include a further seven-kilometre dirt section up to Monte Fraiteve above Sestriere but race director Mauro Vegni is well aware of the risk of extreme weather and closed roads above 2,000 metres in Italy in May.

He is arguably already taking a risk by sending the riders over the Passo dello Stelvio and the Colle dell'Agnello and will no doubt have alternative routes ready to avoid the embarrassment the Tour de France suffered in 2019 when the decisive stage to Tignes was stopped due to a landslide and extreme weather.

The climb to Sestriere serves to set-up the final fight for the maglia rosa on the final time trial stage to Milan. Dumoulin gained a minute on Nibali and Nairo Quintana in a similar finale in 2017 to snatch final victory. Vegni and RCS Sport are no doubt hoping for a similar three-week battle and finish to the 103rd Giro d'Italia come next May.