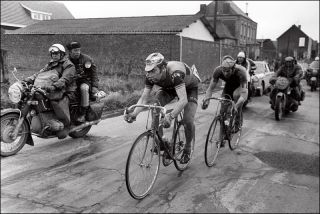 In cycling, there are five races that are considered 'Monuments': Liège-Bastogne-Liège, Paris-Roubaix, Il Lombardia, Milan-San Remo and the Tour of Flanders. They are the foundation of the sport's one-day race format and the origin story of professional cycling.

They've shaped the careers of numerous stars of the sport, but none so much as the legend of Eddy Merckx and his biggest rival, Roger De Vlaeminck. Cyclingnews looks at the statistics behind the races and the great Belgians' utter dominance of them.

First, a bit about the Monuments.

Liège-Bastogne-Liège might be the oldest of the five but Paris-Roubaix has been raced the most times. It will be up for its 118th edition this year, if the race goes ahead amid the coronavirus pandemic. The race started in 1896, and was cancelled seven times during the World Wars, while Liège went on hiatus for 12 years after its first three editions, starting in 1892.

Paris-Roubaix: The fastest, most consistent, unluckiest riders, and more

Pro cycling by numbers: conclusions from the last decade

To cut a long story short, two winners were awarded at the 1949 edition of Paris-Roubaix and again at Liège in 1957.

In 1949, André Mahé was part of a three-man breakaway that approached the Roubaix velodrome for the Paris-Roubaix victory, but he entered at the wrong gate after officials steered him the wrong way. Meanwhile, Serse Coppi, the brother of legend Fausto Coppi, arrived in a group that went the right way and won the sprint. It took months for a decision, but Serse Coppi was named joint winner with Mahé.

The 1957 edition of Liège-Bastogne-Liège was a miserable race held in frigid conditions and snow. Germain Derijcke came in as winner some three minutes ahead of his nearest rival, but he'd jumped through a closed level crossing. Rather than disqualify Derijcke, officials opted instead to promote second-placed solo rider Frans Schoubben to joint winner.

In those early years, the Italian races Milan-San Remo and the Giro di Lombardia were contested mainly by Italians, with the other Classics dominated by the French and then the Belgians.

During the early 20th century, the Monuments were contested mainly by riders from a few countries: Italy, France, Belgium, Germany and a few Dutch or Swiss, although the full list of starters has been lost to the ages. In the post-World War II era, the fields became more international, but the Italians were most represented in the Monuments, along with the French and Belgians; the riders from the host countries hold their respective races very dear to their hearts.

The below graph displays the number of unique riders from each country represented in the results from all of the Monuments per year.

The Monuments have become more international despite a high number of home riders. The graphic below shows the number of countries represented in each of the five races.

The total number of countries being represented across the Monuments rose from the single digits in the pre-World War era to 30 or more per race in the 21st century as the Monuments attracted more riders from across Europe, the Americas, Africa, Asia and Oceania.

Riders from the traditional cycling countries still make up the large part of the Monument pelotons, but the number of nations represented shows that the UCI's internationalisation efforts have paid off.

One name stands out in the Monuments: Eddy Merckx. He was so dominant that he holds almost all of the associated records – most career wins, most Monument wins in one year, most podiums, most top 10s. But he was but one part of an era of Belgian domination of the Monuments.

Before there was Merckx, there was Rik Van Looy and an absolute wrecking crew of Belgians that would have swept all of the podiums in 1959, were it not for Spaniard Miguel Poblet.

In the late-1950s, Rik Van Steenbergen, Raymond Impanis, Fred De Bruyne, Germain Derijcke, Van Looy and other Belgians accounted for over half of the Monument podium spots.

The below graph shows the percentage of all of the Monument podiums occupied by Belgians, Frenchmen, Italians or the Dutch. We've excluded other nations for clarity. The percentage is shown as a five-year rolling average, but hover over each dot to see the percentage for each year.

In the 1990s, it was the rise of the Italians, with Michele Bartoli, Paolo Bettini, Davide Rebellin, Damiano Cunego, Mario Cipollini and Alessandro Petacchi among those contributing to that country's golden age in the Monuments.

There was one rider who chose to challenge 'The Cannibal' on his own turf, and that was Roger De Vlaeminck.

Merckx and De Vlaeminck were so dominant that their victories in those five races accounted for almost half of all the Monuments of the 1970s.

Merckx holds the outright record for Monument wins over the course of his career at 19 – seven in Milan-San Remo, five in Liège-Bastogne-Liège, three in Paris-Roubaix and two each in Tour of Flanders and the Giro di Lombardia as it was called then – between 1966 and 1976.

De Vlaeminck won 11: four in Paris-Roubaix, three at Milan-San Remo, two Lombardias and one each in De Ronde – Flanders – and La Doyenne between 1970 and 1979.

Other riders who stand out in different decades are the versatile Alfred De Bruyne in the 1950s, winner of four different Monuments, and six in total, Sean Kelly in the 1980s, Paolo Bettini and Tom Boonen in the 2000s, and Fabian Cancellara in the last decade.

Between the 1960s and 1980s, Van Looy, Merckx, De Vlaeminck, and Kelly claimed 30 per cent of all Monuments and they remain the riders with the most Monument wins.

To put this era into perspective, no modern rider has come close to that degree of dominance. De Vlaeminck claimed four more wins than Tom Boonen ever achieved. The top still-active rider, Philippe Gilbert (Lotto Soudal), has won five: Il Lombardia twice and one each in Liège, Paris-Roubaix and Tour of Flanders. Gilbert needs 'only' to win Milan-San Remo to 'complete the set' and join Van Looy, Merckx and De Vlaeminck as a winner of all five.

In this 35-year span of cycling between Van Looy, Merckx, De Vlaeminck and Kelly, cycling greats such as Bernard Hinault, Francesco Moser, Felice Gimondi and Hennie Kuiper were dwarfed by these four men.

Merckx and De Vlaeminck were so dominant that, in terms of overall Monument podiums, they eclipse even campionissimi like Fausto Coppi, Gino Bartali and Constante Girardengo, and modern-day stars Tom Boonen and Fabian Cancellara.

Monuments in the Merckx era

The amazing capacity of these riders is also reflected in the number of podium finishes and top 10s they achieved in the Monuments, and how many victories, podiums and even top-10 finishes they obtained in the same year.

De Vlaeminck raced 49 Monuments, winning 11 of them and finishing on the podium in 10 more, but he never finished lower than 31st. His average placing was 7.2, and he never dropped out of a single one.

Léon Houa, who won the first three editions of Liège-Bastogne-Liège, has a 100 per cent hit rate, but those were the only Monuments raced. Henri Pélissier raced 14 Monuments between 1911 and 1926 and never finished lower than sixth.

However, when we look at the number of victories divided by the number of Monument starts, Merckx once again rises above them all with a whopping 37.25 per cent win-rate.

Of course, there are several other riders who raced fewer Monuments and won a higher percentage – Fausto Coppi won 31 per cent, Alfredo Binda won 46 per cent – but they had fewer opportunities to race Monuments.

Annual records for the Monuments

Merckx, De Vlaeminck and Van Looy are the only riders to have won all five throughout their careers.

Sean Kelly won nine Monuments, but never managed to win the Tour of Flanders. He is part of an elite list of riders who've won four different Monuments during their careers along with Hennie Kuiper, Germain Derycke, Louison Bobet, Alfred De Bruyne and Philippe Gilbert.

Another measure of a rider's dominance is the ability to win multiple big races per year. Merckx excelled in this regard, and he is the only rider to have won three Monuments in the same year – and he did it four times.

Merckx and Kelly each have four Monument podiums in the same year: in 1969 and 1971 Merckx finished second at Paris-Roubaix in addition to his other victories, while Kelly won at Liège and Roubaix in 1984, but came second to solo victors at Milan-San Remo and the Tour of Flanders, then turned around in 1986 and won Roubaix and Milan-San Remo, with second places at Lombardy and Flanders.

It's difficult to quantify how difficult a race is: a flat race like Paris-Roubaix is made more difficult by the rough cobblestone sectors, while a hilly race such as Il Lombardia can come down to a bunch sprint if the race becomes tactical.

The best guess for degree of difficulty is how shattered the peloton becomes along the way.

It stands to reason that the hardest races would result in small groups with big gaps in between, and a few Monument editions certainly stand out as tiny dots floating above the rest – notably the famous 1985 Tour of Flanders won by Eric Vanderaerden, the 1980 edition of Liège-Bastogne-Liège won in the snow by Bernard Hinault, and the snowy 1957 Liège with its dual winners. More recently, the wet and cold 2010 Il Lombardia and a sloppy wet 2001 Paris-Roubaix won by Servais Knaven rise above the rest.

Milan-San Remo, which is largely flat until the finale, and so more suited to bunch sprints, is reliably on the lower end of the scale, with larger groups staying closer together, while the other four Monuments appear to have had smaller gaps between groups in the past, but still break up into groups of fewer riders than Milan-San Remo.

Most professional cycling races have trended faster over time, and the Monuments are no exception, although there were some very fast years in the 1960s.

The advent of aerodynamic frames, helmets and clothing could well be responsible for the continuing rise in speeds as well as climate change, with most of the spring Classics now contested in warm and dry conditions.

That will all change in 2020, however, with the entire calendar shifted to the end of the year because of the coronavirus pandemic postponements.

The new calendar also throws up the distinct possibility of a record-breaking number of Monuments won in a single year, since riders will only need a few weeks of peaking to take home four: Liége, the Tour of Flanders, Paris-Roubaix and Il Lombardia are all set to take place in October this year.