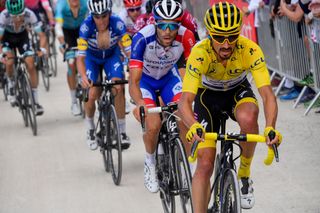 The UCI has announced the new post-COVID-19 dates of the men's and women's WorldTour calendars, confirming recent reports that the Giro d'Italia has been rescheduled for October 3-25, with many of the Belgian Classics, including Liege-Bastogne-Liege, the Tour of Flanders and Paris-Roubaix, taking place at the same time, while the 18-stage Vuelta a España will overlap with the final week of the corsa rosa and is scheduled to take place between October 18-November 8.

The Tour de France has already been penciled in for August 29-September 20 and is set to be the first Grand Tour of the new autumn road racing season. France has banned public gatherings of over 5,000 people until the end of August but race organiser ASO is hoping to secure some kind of exemption and follow a protocol that protects the health of the riders and the public so the Grand Depart can be held as planned in Nice in late August.

ASO also hope to hold a five-day Critérium du Dauphiné between August 12-16, while Tirreno-Adriatico will become key preparation for the Giro d'Italia but would be held during the Tour de France, from September 8-14.

Italy has started to emerge from a strict lockdown after close to 30,000 COVID-19 victims, and if any resurgence is controlled, Milan-San Remo will be held on August 8. The Prudential RideLondon Surrey Classics has secured a date of August 16, the Bretagne Classic is now set for Tuesday August 25, a few days before the Tour de France.

The Grands Prix Cyclistes du Quebec and Montreal have retained their original dates of September 11 and 13 and will be followed by a block of Classics in October, with the Gree - Tour of Guangxi in China listed for October 15-20.

The E3 BinckBank Classic, the Tour de Romandie, Tour de Suisse, Volta Ciclista a Catalunya, Itzulia Basque Country and Donostia San Sebastian Klasikoa (Spain) have all been cancelled at the request of the race organisers. Dates for the one-day EuroEyes Cyclassics Hamburg and Eschborn-Frankfurt races in Germany have still to be confirmed.

Only one event of the 22-race Women's WorldTour was contested before the COVID-19 pandemics lead to a global lockdown in mid-March. A number of organisers have opted to cancel their 2020 races but the UCI announced that the new women's calendar would begin with Strade Bianche on August 1. The Giro Rosa has a new date of September 11-19, with a three-day Madrid Challenge by La Vuelta on November 8, the last of the new 18-race women's 2020 WorldTour.

A women's Paris-Roubaix has been added to the calendar, with the first edition on the same day as the men on Sunday October 25.

Further changes could be needed during pandemic

With Strade Bianche now set for Saturday August 1 and other races packed in around the WorldTour races until Il Lombardia on Saturday November 14, riders and teams face three and half months of intense racing, with the leading men's teams expected to operate triple race programmes, possibly divided into geographical areas, to limit travel across Europe and so safeguard everyone's health. Riders currently outside of Europe may have to observe a 14-day period of quarantine when they travel to Europe and undergo testing for COVID-19.

Teams are keen to return to racing when it is considered safe to do so, in order to give their sponsors a return on investment after months without major races.

The new race calendars were approved by the UCI's Management Committee and the Professional Cycling Council (PCC), which is made up of the different stakeholders, including race organisers teams, riders and member of the UCI Management Committee. However, the UCI accepted that the ongoing fight to control COVID-19 means that races could be moved again, postponed or even cancelled depending on the control of the virus in individual countries.

Many National Road Race Championships, especially in Europe, are scheduled for September 22-23 but these may be postponed to a later date if several nations do not allow racing by then. The UCI Road World Championships are planned for September 20-27, but local organisers have said any final decision will be taken in late June and will depend on whether public gatherings of more than 1,000 people are still prohibited in Switzerland.

"These dates, crucial for stakeholders, naturally remain subject to the lifting, until the end of the season, of the restrictions relating to the organisation of events put in place by the authorities in the concerned territories. We note that the situation is a changing one, which could mean the UCI may need to adjust the calendar to take into account the development of the pandemic," the UCI said, when revealing the new calendar.

The UCI confirmed that team sizes for Grand Tours would remain at eight riders but could be reduced from seven to six for some of the one-day races, possibly to give an opportunity to more ProTeams to take part in the reduced race calendar.

The UCI has also created a steering group under the authority of UCI Medical Director Xavier Bigard to define the extra health and safety measures needed to protect the teams due to the risk of COVID-19 at races.

The steering group will include representatives from teams, team doctors, riders and race organisers, and is expected to draw up protocols for safe social distancing, pre-race testing, and a strategy in case a rider or team member tests positive for COVID-19. Other sports, including football, have devised similar protocols.

The biggest doubt concerns the emergence of any COVID-19 cases during a race and whether the race would be stopped and riders placed into protective quarantine.

The UCI indicated that the organisation of the end of the season for all other events on the UCI International Road Calendar will be carried out in consultation with National Federations and announced on 20 May at the latest.

"Since the beginning of the crisis, it is has been our responsibility to help the players of road cycling’s families by introducing measures of support – on both a sporting and financial level – that will enable them to get through this period that is unprecedented for cycling and our Federation," UCI President David Lappartient said.