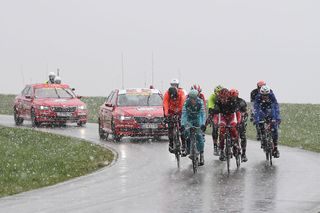 Liège-Bastogne-Liège, the oldest of the spring Classics and known as La Doyenne, is the last of the spring Monuments and the scene of some of the most infamous exploits in cycling history.

Run in the rugged hills of the Ardennes in south-eastern Belgium, the course has varied over its history. The first edition in 1892 was a contest of amateur gentlemen who rode from Spa to the train station in Bastogne and back. It took winner Léon Houa almost 11 hours to finish the ride, and the last rider didn't cross the line for another five hours.

After a trio of wins by Houa, the race vanished until 1908, when it became Liège-Bastogne-Liège. After interruption by the World Wars, the race cemented itself in the professional calendar as a prime objective, being part of the Super Prestige – a predecessor to the UCI World Cup.

Teasing out the facts and figures from Amstel Gold Race

Its position on the calendar predisposed the race to horrible weather decades before the riders demanded an Extreme Weather Policy to cancel races if dangerous conditions arose. Eddy Merckx won the 1971 edition in freezing cold and snow, suffering an uncharacteristic bonk before rebounding to beat Georges Pintens.

Perhaps the most memorable edition took place in 1980, which was won by Bernard Hinault, again in driving snow, earning the race the nickname Niege-Bastogne-Niege (niege is French for snow).

Since 1990, the race has been organised by the ASO, which also puts on the Tour de France, and the race finish moved outside Liège to the industrial suburb of Ans. The move allowed the inclusion of the steep Côte de Saint-Nicolas and the uphill finish to the line – making for quite a selective final 20km.

But in 2019, the finish was moved back to the centre of Liège and, in a frigid rain-soaked final climb of the Côte de la Roche-aux-Faucons, with 15km to go, Jakob Fuglsang (Astana) made his move, mowing down the early breakaway and distancing all his rivals to solo to victory.

'The Cannibal' – Eddy Merckx – made Liège-Bastogne-Liège history with five victories in the race. His first win came in 1969 and, after coming a disappointed third after Roger De Vlaeminck escaped to take the title in 1970, Merckx came roaring back with a trio of back-to-back wins.

Merckx could win in any fashion and his displays in La Doyenne demonstrate the versatility and dominance of the Belgian legend. In 1971, he attacked with 92km to go and gained five minutes. He would have won solo but suffered a near-collapse and was caught by Georges Pintens, but he nevertheless summoned up enough energy to win the sprint.

The next year, Merckx made the solo move work to win by 2:40 over Wim Schepers when the finish was, for one year, moved to Verviers. It came back to Liège in 1973, and a sizable group came into the Rocourt velodrome, but Merckx led the sprint out and still won.

Merckx fell ill in the spring of 1974, and failed to win any of the Classics for the first time in his career, but climbed back onto the top step of the podium in Liège in 1975.

Merckx might sit atop the medal table with his five wins and two podium placings, but Alejandro Valverde has stood on the Liège-Bastogne-Liège podium the most: the Spaniard has three second-place finishes and a third for a total of eight trips to the podium ceremony.

At nearly 39 years of age, Valverde could have tried to tie Merckx's record, but the 2020 race was cancelled because of the coronavirus pandemic, although it has potentially only been postponed until early October. He's vowed to reconsider his retirement and could still equal the Belgian for most wins.

Philippe Gilbert has started Liège-Bastogne-Liège a whopping 15 times. Although we don't have good date of non-finishers for earlier editions, this ranks Gilbert at the top of the number of participations. But he's also ranked with the top six riders who have all finished the race 13 times.

Gilbert won the race in 2011, out-sprinting the Schleck brothers Frank and Andy, and was elevated to third after Valverde was disqualified for his connection to Operacion Puerto in 2010. He's been in the top 10 three other times, too.

Ramond Impanis won Gent-Wevelgem (1952, 1953), the Tour of Flanders (1954), Paris–Roubaix (1954) and Flèche Wallonne (1957) but, despite finishing second four times at Liège-Bastogne-Liège, he never managed to win, making him the unluckiest star of this Monument.

Dutchman Michael Boogerd was runner-up three times and third once, and would have another third if his result in 2005 hadn't been disqualified for doping, so we've given Impanis the title of unluckiest rider at La Doyenne.

This kind of consistency won Van Springel the Tour de France points jersey in 1973, even though he didn't win a stage. He found his success mainly in Bordeaux-Paris – a partly derny-paced marathon covering more than 500km.

The youngest winner in the history books is Victor Fastre, who was 18 when he was declared the victor after the disqualification of Eugène Charlier in 1909.

The youngest modern winner was Bernard Hinault who showed his badger-like qualities at the young age of 22 years 162 days when he won the race in 1977.

Valverde's victory in the 2006 Liège-Bastogne-Liège is the quickest race in the history of La Doyenne. There was conflicting data surrounding the 1963 edition, but Cyclingnews has since discovered many data sources have the wrong finishing time for that year and no source agrees on the distance, so that edition was disqualified from this classification.

Valverde and his rivals sped to the finish in Ans to average 41.2kph that year.

Other than the very first editions of Liège-Bastogne-Liège, the slowest edition was the 1970 race, won by Roger De Vlaeminck at 33.4kph.

It was a good 1.3kph slower than Hinault's epic 1980 victory, won with a solo attack with 80km to go, which netted him the victory by 9:24 over Hennie Kuiper.

The weather was so terrible in 1980 that only 21 riders finished, and the frostbite that Hinault suffered in his hands caused lasting damage.

Most of the quickest editions have been in the modern era of the race as road surfaces and aerodynamic equipment, among other things, have led to a general rise in one-day race speeds.

After that sharp rise between 1997 and 2006, the average speeds have flattened out, with the 2019 edition being one of the slowest of the last decade.

Liège-Bastogne-Liège, like most of the Classics, is a race for the strongest riders, filled with increasingly difficult ascents and long enough to test the endurance of even the fittest athletes. As such, most editions see only a few riders battling it out for the victory, and the rest of the peloton is normally shattered back down the route behind them.

Excluding some early race editions where time gaps are unknown, the largest group that came to the line in Liège was in 1989, when a massive bunch came so close to catching the four-man breakaway that they were given the same time.

Sean Kelly won the sprint, technically from the breakaway, over Fabrice Philpot, Phil Anderson and Pedro Delgado. It was, coincidentally, one of the two longest editions at 268km, and took seven hours 23 minutes to complete.

The early years of Liège-Bastogne-Liège had big winning margins, but since the race became one for professionals, Hinault's incredible fortitude in 1980 earned him the biggest winning margin.

Riding through sleet and snow, Hinault pulled out a nearly 10-minute advantage on his nearest rival – a feat that no modern-era rider could approach.

Valverde had a hefty 4:04 gap to Davide Rebellin in 2008 but, otherwise, every race since 1990 has had a gap from winner to second place of around a minute or less.