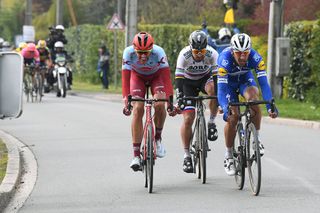 What began as a tune-up event for the much longer Bordeaux-Paris morphed into the most epic cycling event in the modern-day sport: Paris-Roubaix. The rough cobbled sectors that pepper northern France have hosted this test of endurance, strength, and the sheer will to just keep going since 1896 – their dirt and mud-caked forms squeezing out the last bit of energy to sprint for the cobblestone trophy in the Roubaix Velodrome.

The early editions were almost completely unpaved, but year after year parts of the course have degraded so much that they've been paved over with tarmac, threatening to change the nature of the mostly flat course.

Since 1983, fans of the race – Les Amis de Paris-Roubaix – have maintained the famous secteurs of pavé, helping to preserve some 60km of ancient roads: patching holes and relaying stones so the farmers' fields of France can continue to act as the venue for cycling's greatest feats.

Cyclingnews looks back through the results from the last 70 editions of Paris-Roubaix to tease out the statistics, stories, facts and figures of 'The Hell of the North'.

Roger De Vlaeminck was so successful in the race that his nickname was 'Monsieur Paris-Roubaix'. The Belgian's legendary bike-handling skills led him to four victories in the Hell of the North. De Vlaeminck took his first victory in 1972 followed by back-to-back wins in 1974 and 1975. In 1977, De Vlaeminck won the Tour of Flanders to equal Rik van Looy and Eddy Merckx in winning all of cycling's Monuments, and then went on to win his fourth Paris-Roubaix, setting a record that stands to this day – only equalled in 2012 by Tom Boonen.

Boonen showed his prowess in the race early on when, as a helper for teammate George Hincapie, he went on to land on the podium after the American crashed out in 2002. He claimed his first victory in the race in 2005 by out-sprinting Hincapie, now on a rival team. He went on to take back-to-back wins in 2008 and 2009, and his fourth in 2012. An attempt to break De Vlaeminck's record fell short in a sprint won by Mathew Hayman in 2016, after which Boonen retired.

Paris-Roubaix is a specialist's race – knowing how to float over the cobbles, how to pick the best lines, avoid crashing in dusty, dry or muddy turns, how to come back from punctures without panic and knowing the best time to attack all take practice.

Hayman, Servais Knaven and Bernhard Eisel hold the record for most finishes with 16, with Hincapie and Gilbert Duclos-Lassalle just behind with 15 completed races.

Paris-Roubaix can be an immensely frustrating experience for even the most talented cyclists. Bernard Hinault called the race 'bullshit' after crashing seven times in the 1981 edition, even though he ended up winning. Jacques Anquetil dismissed it as a 'lottery'. Theo de Rooij called it a 'pile of shit', Chris Boardman called it a 'circus' – but each year riders return because the experience is indelibly etched in their memory, the pain fades and the pursuit of glory resumes.

Juan Antonio Flecha was one of the few Spaniards to take to Paris-Roubaix, racing it 11 times, finishing inside the top 10 eight times, and landing on the podium three times. But Flecha never managed to win it, making him the nearly-man of Paris-Roubaix.

The difficulty of Paris-Roubaix – in particular the five-star cobbled sectors of the Carrefour de l'Arbre, Mons-en-Pévèle and the Trouée d’Arenberg – shatter the peloton in most years, and riders come into the velodrome for the final sprint in small groups or as solo riders. But there have been some years where a rather large group has sprinted for the victory.

The biggest group to come to the line together was in 1958, when Leon Van Daele won the race in a sprint between 23 riders.

Paris-Roubaix has a high frequency of solo winners – again because of the high degree of difficulty. It's a perfect opportunity to take the win the best way – with nobody else in the picture.

There have been some pretty close sprints in Paris-Roubaix, and before modern high-speed cameras there might have been closer races, but the closest sprint is unofficially the 1990 edition when it took the officials a torturous 10 minutes to award the victory to Eddy Planckaert over Canadian Steve Bauer.

Eddy Merckx was legendary for crushing the competition, and no other rider crushed it in Paris-Roubaix like the Belgian. In a rainy edition in 1970, Merckx opened up a massive 5:21 gap on his closest rival – De Vlaeminck – to claim the victory.

Gilbert Duclos-Lassalle raced Paris-Roubaix 11 times before he got it just right: in 1980 he was the first man behind Moser, in 1983 he won the sprint for second behind Hennie Kuiper. In 1989, he was out-sprinted for the final podium spot by Edwig Van Hooydonck. But everything finally came together for the Frenchman at the age of 37 when he went into an early breakaway and managed to stay clear for the victory over Olaf Ludwig. He went on to repeat the feat the next year, out-sprinting Franco Ballerini to become the race's oldest winner at 38.

Since 1950, Paris-Roubaix has been dominated by older, more experienced riders, but Eddy Merckx became the youngest winner of this era in 1968, aged 22 years and 295 days. The youngest of all time remains Albert Champion, winner in 1899 at age 20.

Greg Van Avermaet's victory in 2017 was won at a startling 45.2kph average speed in warm, dry conditions, with a tailwind boost.

The slowest edition came in 1958 when Leon Vandaele won from that big bunch sprint. The race crawled along at 33.3kph.

Paris-Roubaix has been getting faster over the past 20 years. Cyclingnews looked at five- and 10-year moving averages and saw a peak over 40kph in the early 1980s before the speeds took a sharp dive – likely due to the inclusion of restored cobbled sectors. There was another peak on the five-year moving average in the mid- to late-1990s, possibly due to the increasing use of EPO.

However, over the past decade, both the five- and 10-year averages have skyrocketed to 43kph.