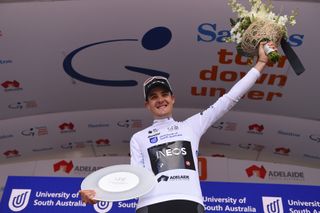 Pavel Sivakov, winner of the 2019 Tour of Alps and the Tour of Poland, has started this season with his eyes firmly fixed on a place in the Team Ineos 2020 Tour de France line-up, according to sports director Brett Lancaster.

"Sivakov is banging on the door to get a start in the Tour," Lancaster told Cyclingnews at the Tour de la Provence, where Sivakov is racing after making his season debut at the Tour Down Under.

"He already performed very well for us in Australia, so he's probably aiming for a top three and the podium here," Lancaster admitted after the 22-year-old finished second in the Cadel Evans Great Ocean Road Race ten days ago.

"There's a lot of good riders here though, and it's a great little race. We use it as preparation for the Classics guys and for the likes of Eddie Dunbar — it's his first race of the year. It'll be a good test for him and Gianni Moscon's in good nick too, so we have options. There's two very hard stages — 2 and 3 — that will be a test and the last day's grippy too."

Like most on the race, Lancaster had no qualms over the inclusion of a stage finish to Chalet Reynard on Mont Ventoux as early as mid-February.

"Look at the field here — it's brought a lot of good climbers to this race and some big stars. FDJ have just come from altitude and everyone's going well by this time of the season. Everybody's ready to go."

But while Sivakov is already eyeing July, Chris Froome's return to racing in earnest begins next week when he competes in the UAE Tour on February 23rd.

"By all accounts, he's going well and he's on track, but I've been in Australia for a month. If anyone can do it, it will be him. But he has to be going well."

Of all the World Tour teams racing in Provence this week, it is Team Ineos who have become most associated with monitoring every minute logistical detail, but Lancaster admitted that, with riders and staff in every major team constantly on the move, the spread of the Coronavirus was "a worry."

"You know how advanced we have been with our hygiene - we've been on that for years - but it's now stepping up another level. It is a worry," he revealed.

"What we don't know is the knock-on effect, because so much of everything in cycling is produced in these Asian countries, so it will be interesting to see what the repercussions are in the coming months."

In late January, when the first case was announced in the UAE, Team Ineos said that they were "monitoring" the situation in regard to the spread of the virus, but with F1 forced to postpone the Chinese Grand Prix and even the Tokyo Olympics in question, road racing, with its proximity to the fans and ease of access, is among the most vulnerable of sports.

"It's about monitoring and risk assessment," Lancaster said, "but fingers crossed. We just have to see what the governments are doing to contain the outbreak."