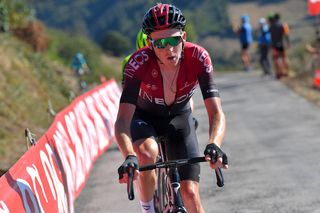 Tao Geoghegan Hart (Team Ineos) may have had what he describes as an up and down season but the 24-year-old has progressed in a number of key areas, and despite not putting together a three-week week challenge at Giro d’Italia, he believes that there are still plenty of positives to draw upon as 2019 comes to a close.

Geoghegan Hart raced two Grand Tours this year for the first time his career, starting the Giro as a protected leader with Pavel Sivakov, after Egan Bernal was ruled of the race through injury.

Geoghegan Hart retired on stage 13 of the Corsa Rosa but still racked up a number of impressive rides in the first half the year, including two stage wins and second overall at the Tour of the Alps, and reasonable showings at Paris-Nice and the Volta ao Algarve.

Vuelta a España: Geoghegan Hart fights his way to third place on stage 15

Fifth in the Tour de Pologne in August was followed up by another chance to lead Team Ineos at the Vuelta a España but that bid collapsed on stage 2. From there Geoghegan Hart turned his attention to stage hunting and although he missed out, a string of aggressive performances in the mountains saw him finish 20th overall in Madrid.

“It's been a strange year really, there were some really, really good moments and some really shit ones. Then the Vuelta was somewhere in between,” Geoghegan Hart said at the World Championships.

“The first week was awful, but it became a little more positive. I didn't get the win I was aiming for once the focus switched to stages, but I still feel like I'm progressing. Maybe I'm old now in the new age of cycling where everyone is peaking at 15, but still feel like I'm stepping forward every year.

"In Poland, in the Alps, in the Giro for some of it, I was there with the best so you can only take a positive from that and hopefully in the future the pieces of the puzzle will come together in something like the Vuelta. As long as you stay focused and professional the chances will always come, it's just about keeping that perspective.”

Geoghegan Hart has not yet had a chance to pen down his plans or schedule for next season but once the Grand Tour routes are announced the Team Ineos management will align their assets between the Giro, Tour and Vuelta. It’s more likely than not that Geoghegan Hart will return to either the Giro or the Vuelta at this stage. For now though, Geoghegan Hart still has the matter of closing out his season with a handful of Italian one-day races on his programme.

“A friend of mine who's a bike rider that I was racing against at the Vuelta was trying to persuade me to go for the Tour next year, but I really liked the Giro even though it was a pretty rubbish 13 days apart from the prologue. But I really liked it, so I'd be interested in doing that again, but it's up to the team,” he said.

“This year in the Giro I got too distracted by thinking, 'this is my big chance, it might be the only chance I get to lead a Grand Tour'. I don't think it's healthy or productive.”

Heading back to the Giro would possibly allow Geoghegan Hart to race with more freedom than at the Tour de France, where Team Ineos tend to race in a more disciplined manner as they chase overall victory.

“I think that away from the Tour there are a lot more opportunities, not that I've done the Tour, but if you look at the way the race is raced, in the Giro all the time there are breaks going to the line, there are guys going from 15th on GC to fifth," Geoghegan Hart suggested.

"Like with Carapaz, he was one of a few leaders within Movistar and people weren't saying he was going to be the winner, they were looking at Landa, and he won. I like that about the Giro. It's more than just come to the last climb and race to the top.”