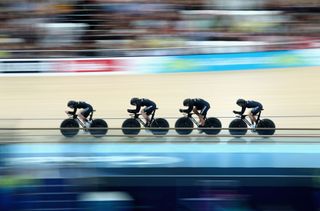 The third round of the UCI Cycling Track World Cup kicked off on Thursday and Friday with the Team Pursuits and the Team Sprints in Hong Kong. Germany doubled in gold medals after winning the men's Team Pursuit and the women's Team Sprint.

The qualification rounds of the Team Pursuits were held on the opening night where New Zealand's women's squad and Germany's men's squad posted the fastest times.

Both nations won their respective heats during round 1 where New Zealand beat the Republic of Korea in the women's Team Pursuit and Germany beat Italy in the men's Team Pursuit, both advancing to the gold-medal rounds.

In the women's finals, New Zealand's team of Michaela Drummond, Emily Shearman, Nicole Shields and Ally Wollaston won the gold medal with a time of 4:19.635. Belgium's team of Jolien D'hoore, Lotte Kopecky, Shari Bossuyt and Dom Annelies were forced to settle for the silver medal.

Republic of Korea beat Germany to secure the bronze medal.

Switzerland won the bronze-medal round ahead of Italy.

The Netherlands posted the fastest time in the qualifying round of the men's Team Sprint, while China was fastest in the women's qualifying round. Both nations advanced to the gold-medal final after the first round and where they were expected to dominate.

The Netherlands team of Jeffrey Hoogland, Harrie Lavreysen and Roy van den Berg did not disappoint after winning the gold medal with a time of 42.271 to best Germany.

France won the bronze medal in the round against New Zealand.

In the women's Team Sprint, it was Germany that came away with the victory. The team of Pauline Sophie Grabosch and Emma Hinze beat China with a time of 32.564.

World Cup track racing continues on Saturday with the women's Madison, Sprints and Scratch races, and the men's Keiren and Omnium.