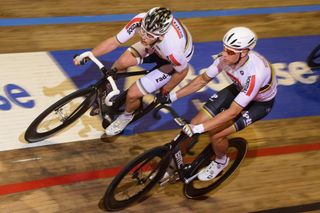 The final day of racing at the Hong Kong Track World Cup saw some fierce racing and some high-speed crashes as Asian riders took on their rivals on home ground.

South Korea's Hyejin Lee beat Liubov Basova of the Ukraine and Yuka Kobayashi of Japan to win the women's Keirin final, while Yumi Kajihara of Japan won the women's four-event Omnium after a count back of the points totals and placings. She and Maria Martins of Portugal both finished on 113 points but Kajihara took the win thanks to better placings. Jolien d'Hoore of Belgium finished third with 106.

Men's sprint world champion Harrie Lavreysen showed off his rainbow stripes and his speed by winning in Hong Kong. The Dutchman beat his friend and great rival Jeffrey Hoogland in the final, winning in two sprints after some tussles in qualifying. Tomohiro Fukaya of Japan did the same in the ride for the bronze medal, beating Mateusz Rudyk of Poland.

The men's Madison was equally intense, with crashes as well as fast exchanges, sprints and attacks to take laps.

German pair Roger Kluge and Theo Reinhardt showed why they are the current Madison world champions, scoring points in a series of intermediate sprints before taking a decisive lap to score 20 points. They finished with 52 points, an ample margin on New Zealand's Tom Sexton and Campbell Stewart, who won the final sprint to take ten points but ended the 200-lap race with 38 points. Great Britain's young pair of Mark Stewart and Fred Wright were third with 33 points.

Roy Eefting of the Netherlands won the men's scratch to bring down the curtain on the three days of racing. He beat Christos Volikakis of Greece and Corbin Strong on New Zealand.

The whole New Zealand team celebrated on the podium on Sunday evening after winning the team prize and greatly boosting their points haul for Olympic qualification. The Netherlands leads the nations ranking after the third rounds of the world Cup with a total of 14932 points.  Great Britain is second with Germany third.

The Kiwis will host their rivals in the fourth round of the track World Cup on December 6-8 in Cambridge, with the Australian round in Brisbane on December 13-15.

The World Cup ends in Milton, Canada with the sixth round held between January 24-26.