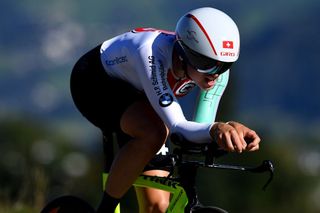 The newly named Equipe Paule Ka swept the podium at the Swiss Time Trial Championships in Belp on Sunday. Marlen Reusser claimed the national title after covering the 20km course in 27:47 beating her teammates Elise Chabbey by 1:03 and Kathrin Stirnemann by 1:18.