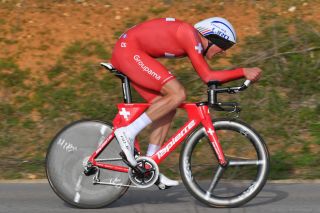 Stefan Küng won his fourth consecutive time trial national title at the Swiss Championships on Sunday. The Groupama-FDJ rider covered the 33km course in a time of 37:36 to take the victory ahead of Silvan Dillier (AG2R La Mondiale) by 54 seconds and Stefan Bissegger by 1:07.

"It was the first time I had started a race in four months," said Küng. "It was something special, but it's nice to put on a bib and regain the racing sensations.

"In addition, it went well. My mission was to defend the jersey and that's what I did. It's nice to be able to wear it for another year on international races. I had recognized the course several times and I knew what I had to do. I had a plan in mind and was able to execute it 100%. It's also a pleasure to open the counter with my new bike."

Küng started the season at Volta ao Algarve em Bicicleta and Omloop Het Nieuwsblad in February, and then he raced Kuurne-Brussel-Kuurne in March. He went on to race at Paris-Nice before the cycling calendar was halted due to the COVID-19 coronavirus pandemic.

"Normally, the championships are just before the Tour [de France] so we don't prepare for it in the same way. I am coming out of an altitude training course and I did not necessarily prepare myself specifically for this test. I did a lot of time trials but they were included in my planning anyway. I have not yet made any intense efforts and I felt it today," Küng said.

"It was a course with a lot of raises, it stung, but it felt good to find these racing sensations. In training, we always have a margin, we adapt the pace, we can choose a course with fewer turns. In any case, it feels good to run."

The UCI announced the revised late-season calendar in May and the WorldTour will resume on April 1 at Strade Bianche with the Tour de France set to take place from August 29-September 20.