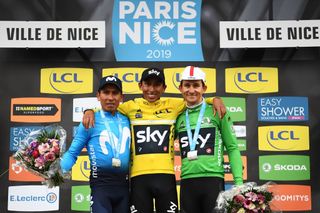 Who is and who isn’t? Ian Brown’s repeated question from the stage of Blackpool’s Empress Ballroom all those years ago during a famous Stone Roses concert has been echoed in the days leading up to the 2020 edition of Paris-Nice.

At the time of writing, seven WorldTour teams have confirmed their withdrawal from the Race to the Sun, citing concerns over the risk of contracting or spreading coronavirus Covid-19.

The withdrawal of Team Ineos of defending champion Egan Bernal is also a mark of respect to the late Nicolas Portal, who died tragically earlier this week and whose funeral takes place in Auch on Monday. CCC Team, Mitchelton-Scott, Movistar, Astana, UAE Team Emirates and now Jumbo-Visma have pulled out of Paris-Nice – and the since-postponed slate of racing in Italy – strictly as a precaution against Covid-19.

Earlier this week, however, the French ministry for sport gave the green light for Paris-Nice to go ahead, albeit with a caveat that local governments along the route retain the right to impose restrictions if the situation develops. As of Friday morning, France had 423 confirmed cases of Covid-19 distributed nationwide, but Emmanuel Macron’s government has for the time being stopped short of declaring a stage 3 epidemic in the country and taking dramatic actions similar to those decreed in Italy that forced the cancellation of all the March races.

Paris-Nice, then, remains slated to go ahead, and race organiser ASO have looked to offset the loss of seven teams by making some late changes to its list of invitees. Pro Continental squads Circus-Groupe Gobert and B&B Hotels-Vital Concept were awarded wildcards on Thursday, while teams are now permitted to field eight riders apiece rather than the previously allotted seven.

Following the cancellation of Strade Bianche and Tirreno-Adriatico, a number of teams have shuffled their decks with the (for now) impending cobbled Classics in mind.

Men like Peter Sagan (Bora-Hansgrohe) and Zdenek Stybar (Deceuninck-QuickStep) have been drafted into their teams’ Paris-Nice line-ups. Stage racing grandees including Vincenzo Nibali (Trek-Segafredo) and Romain Bardet (AG2R La Mondiale) have also been redeployed to France.

ASO has also dismissed reports in La Gazzetta dello Sport that riders who had competed at the UAE Tour or were resident in the Lombardy and Veneto regions of Italy would not be permitted to compete. However Trek-Segafredo will leave several Lombardy-based staff at home and Giulio Ciccone will not follow Swiss-resident Nibali to Paris-Nice. Riders like Sam Bennett (Deceuninck-QuickStep) and Caleb Ewan (Lotto Soudal) thus have the all-clear to participate.

And yet, doubts linger over the event. Jumbo-Visma became the latest team to withdraw from Paris-Nice on Friday afternoon, and while Israel Start-Up Nation has been bullish about competing wherever it can in the coming weeks, a growing body of teams appears to be having misgivings about the wisdom – not to mention the optics – of racing while Europe and the world grapple with the Covid-19 epidemic.

On Thursday, France’s Ligue Nationale de Cyclisme published guidelines for competitors and suiveurs in a bid to limit the risks of transmitting Covid-19 at Paris-Nice. They include riders signing on with their own pens, reduced podium ceremonies, minimum distances for journalists carrying out interviews and an avoidance of interaction with the public.

The cancellation of the final two stages of the UAE Tour – and, lest it be forgotten, a week on, four teams remain under quarantine in an Abu Dhabi hotel – shows just how vulnerable the moving citadel professional cycling is to the coronavirus.

Seven teams have already decided that competing at Paris-Nice is not worth the risk. More may yet follow suit. The consequences for the remainder of cycling’s spring calendar – and beyond – are not yet clear.

Paris-Nice is scheduled to get underway in Plaisir, west of Paris, on Sunday with a 154km road stage that features the cobbled climb of Neuphle-le-Chateau in the finale. Stages 2 and 3 to Chalette-sur-Loing and La Châtre should provide opportunities for the fast men, even in this part of the world in March, crosswinds and echelons are an occupational hazard.

The first obvious rendezvous for the GC men comes on stage 4, a 15.1km time trial in Julian Alaphilippe’s native Saint-Amand-Montrond. Winner of the Pau time trial on the 2019 Tour de France, he will expect to be competitive here despite a low-key start to 2020.

The long and hilly stage 5 might see a very reduced peloton by the finish in La Côte-Saint-André, while there is more rugged terrain on the following day’s 100-mile run from Sorgues to Apt.

The final weekend of the race, meanwhile, sees a summit finish at the 1500m-high ascent of La Colmiane (16.3km at 6.3%), where Simon Yates triumphed two years ago. The final stage is again a short and sharp run through the hills behind Nice, with the Col de la Porte, Côte de Berre Les Alpes, Côte de Châteauneuf and Côte d’Aspremont on the menu.