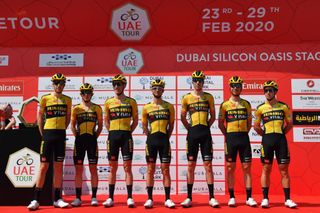 Jumbo-Visma at the UAE Tour, the first race to be affected by Covid-19 coronavirus (Image credit: Getty Images Sport)

Team Jumbo-Visma are the latest team to withdraw from Paris-Nice. The move follows their earlier decision to pull out of Strade Bianche, Tirreno-Adriatico and Milan-San Remo, which have all since been cancelled by organisers RCS Sport in the wake of the Covid-19 coronavirus outbreak.

Paris-Nice organisers ASO announced on Thursday evening that 19 teams would line up for the race, which starts on Sunday. Astana, CCC, Ineos, Mitchelton-Scott and UAE Team Emirates had previously withdrawn from the race, with Movistar following suit earlier on Friday.

The team followed advice from its medical staff, who expressed a negative view about the "lack of adequate guarantees about the procedures to be followed," a statement issued by the team read.

"This hurts and is disappointing," said Jumbo-Visma director Richard Plugge. "But this is the best decision we can make now. As management, we have the responsibility to weigh all risks carefully. They are now too large."

The team reported that riders and staff who were due to race in France – including Primož Roglič, Wout van Aert, George Bennett and Sepp Kuss – responded "with understanding and agreement."

Jumbo-Visma stated that they will assess upcoming race participations on a case-by-case basis.

"Cycling has a unique character and travel and staying in hotels is inherent to the sport," said Plugge. "That makes us vulnerable in this corona crisis. The health of riders, staff and the public now deserve every priority, taking into account circumstances that may arise such as quarantine, illness or hospitalization."

Paris-Nice is now set to go ahead with 18 teams, including two newly invited squads in the form of B&B Hotels-Vital Concept and Circus-Wanty Gobert. The race will also feature expanded eight-rider rosters to make up for the withdrawals.

"In this particular context, two additional invitations were granted to teams in the UCI Pro Teams category: B&B Hotels-Vital Concept and Circus-Wanty Gobert," read a statement from ASO.

"After obtaining the agreement of the International Cycling Union (UCI) and in consultation with the teams, the organizers have also decided to increase the number of riders per team from seven to eight."

Meanwhile, the upcoming Italian race calendar has been decimated by the coronavirus fallout, with GP Larciano, Trofeo Alfredo Binda, Settimana Coppi e Bartali and the Tour of Sicily joining the country's WorldTour events in being cancelled.