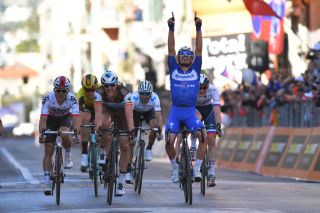 RCS Sport has announced that its upcoming races Tirreno-Adriatico, Milan-San Remo and the Tour of Sicily have been postponed. The move follows Thursday's cancellation of the men's and women's races at Strade Bianche following an Italian government decree suspending all sporting events in response to the Covid-19 coronavirus outbreak.

The decree called for the suspension of all sporting events that cannot be held in a closed arena until April 3. Earlier on Friday, the organisers of the Settimana Coppi e Bartali (March 25-29) announced the race's cancellation.

"Following the confirmation by the relevant authorities that they are unable to grant appropriate authorisations, RCS Sport announces that the cycling race Tirreno-Adriatico, scheduled for March 11-17, is cancelled from its original dates," read a statement issued by RCS Sport.

"Furthermore, as the appropriate authorities have verified that suitable conditions do not exist for them to be unable to guarantee the provisions of the DPCM (Decree of the President of the Council of Ministers of the Italian Republic) on March 4, 2020, and to guarantee the safeguarding of public health and the safety of all the people involved, RCS Sport has made the decision to cancel Milan-San Remo, scheduled for March 21, and the Tour of Sicily, scheduled for April 1-4."

RCS Sport continued by saying that they will request for the races, in addition to the the already-cancelled Strade Bianche, to be rescheduled. Organisers of the GP Larciano, Trofeo Binda, and Settimana Coppi e Bartali have announced that they will seek the same.

"RCS Sport will request the UCI, via the Italian Cycling Federation, to allocate new dates on the international cycling calendar for the three races, as has already been requested for Strade Bianche and Strade Bianche Women Elite."

As of Friday morning, reports from the European Centre for Disease Prevention and Control put the number of coronavirus cases in Italy at 3,858, with 148 deaths so far attributed to the virus.

The next major races in the country are now set for the end of April, at the Tour of the Alps (April 20-24) and the Giro dell'Appennino (April 26).

Tirreno-Adriatico had previously run continuously for 54 editions since its founding in 1966. Milan-San Remo, set for its 111th edition this year, was last cancelled in 1944 and 1945 due to World War Two.