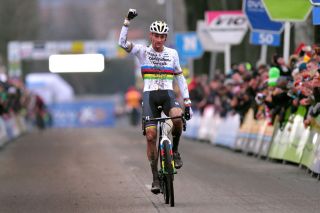 Wout van Aert has returned to racing at Azencross for the first time since his horrific crash at the Tour de France in July. He finished fifth at 1:14 behind Van der Poel.

Van Aert led the field at the start of the race but soon moved back in behind his rivals over the course of the first lap.

Van der Poel crashed early in the race and it took some additional time to get himself going again. "I misjudged myself on a sandbag in front of the bridge," he said.

Although he lost some 40 seconds, he slowly worked his way back to the front of the field to join Iserbyt and Van Kessel.

Van der Poel gained a handful of seconds on Iserbyt during the final lap and finished nine seconds ahead to take his third consecutive victory in Leonhout.