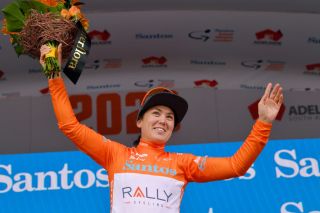 Chloe Hosking said she performs better without too much pressure on her shoulders and that seems to be the case as the Australian stormed to stage 1 victory at the Women’s Tour Down Under. Racing for her new team Rally Cycling, Hosking thanked her teammates for supporting her to success on home soil.

"I spoke this offseason about how I felt like the pressure was lifted when I signed for Rally Cycling and that’s always when I perform my best," said Hosking, who spent the last three seasons with Alé Cipollini before announcing her departure for Rally Cycling last fall.

Stars arrive at the Santos Women's Tour Down Under - Gallery

Santos Women's Tour Down Under 2020 - Preview

"It feels great," Hosking said. "I’m trading one orange jersey for another. It’s my first race with the team and the girls were incredible. I’m really stoked I could give them a UCI win."

Van Witzenburg kicks off mountain competition in Women's Tour Down Under

Marieke Van Witzenburg (Doltcini-Van Eyck Sport) rode away from a three-rider breakaway in opening stage of the Women's Tour Down Under. Her efforts awarded her full points over the day's only Queen of the Mountain at Knotts Hill, 48km into the race.

Although she was eventually caught, she secured the first mountain classification jersey of the four-day race.

"It wasn't the plan to go solo but it was the plan to attack after the first sprint. I was doubting myself a little bit but my teammates said I could go at that point, so I went," Van Witzernburg said.

"I didn't know how long I would stay away but I was very much hoping to stay away until the QOM. I'm so happy that I made it. It was a big goal of mine to get the jersey once and I’m going to try to defend it."

Chapman caught in final 3km of Women's Tour Down Under

Brodie Chapman (FDJ Aquitaine-Nouvelle Futuroscope) was close to winning the first stage of the Women's Tor Down Under after a solo attack that saw her off the front of the field during the closing kilometres.

It wasn't meant to be, however, as a charging field hungry for a bunch sprint caught her within 3km to go, and Chloe Hosking (Rally) went on to win the stage.

"It's exciting racing," Chapman declared. "It would have been fun to watch. That's what it's all about. I went away just by feeling. I thought Doltcini-Van Eyck Sport would ride with their aggressive style of racing. Everyone thought it would be a bunch sprint but that doesn't mean you have to sit around for 100km. We rode together for a while and that was fun.

"Alone, I gave everything I had left and I can't control the peloton alone with my legs, so I was just trying to have a good time and trying to take it all the way to the line but the peloton was very keen on a bunch sprint."

Women's Tour of Britain to end in Suffolk

Although the stage details have not been announced, stage 6 will start in Haverhill and end in Felixstowe on June 13.

Organisers of the Tour of Britain (2.HC) and Women’s Tour (Women's WorldTour) announced that OVO Energy will end its title sponsorship of the events and that they are searching for a new leading financial backer.

SweetSpot and British Cycling have committed to running the events for another 10 years and are looking for a title brand that aligns with those longterm plans.