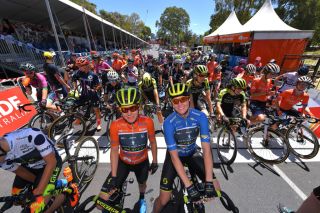 Amanda Spratt and Sarah Roy at the 2019 Women's Tour Down Under (Image credit: Getty Images Sport)

Organisers of the Santos Women's Tour Down Under announced on Thursday that it will be offering live streaming of the four-day race held from January 16-19, 2020. Race director Kimberly Conte said that while she is thrilled that the race has been elevated to the new ProSeries status, and that the overall goal is to become part of the future Women's WorldTour.

All four stages will be live streamed on 7Plus, with the final stage (Schwalbe Stage 4) also being broadcast live nationally through the Seven West Media Network.

Minister for Trade, Tourism and Investment, David Ridgway said the popularity of the Women's Tour Down Under has grown exponentially since being introduced in 2016.

“Having the race live streamed provides an opportunity to broaden the viewership, and send out some amazing images from South Australia.

“This wouldn’t have happened without the support of Santos, whose investment has ensured the WTDU can be watched nationally through 7Plus. Santos has been a terrific supporter of this world-class international event, and in particular, is passionate about the growth and development of the Women’s race.

Santos Managing Director and CEO Kevin Gallagher confirmed that Santos has signed a new partnership with the race on a three-year term, and along with the live streaming will no doubt increasing the stability of the race.

"We are delighted to make this additional investment in the Santos Women’s Tour Down Under to ensure all stages of the race are lived streamed, attracting a national viewing audience,” Gallagher said.

"2020 will be our 11th year as naming rights sponsor of the Tour Down Under, having signed a new three-year sponsorship deal in January.

"The growth of the Women’s race is phenomenal. In just a few short years it’s gone from a few street races to UCI ProSeries status."

Next season will mark the start of a two-tiered teams system - WorldTeams and Continental Teams - that will race as part of a newly structured calendar called the UCI ProSeries includes four classes: UCI Women's WorldTour, UCI ProSeries, Class 1 and Class 2.

The Women's Tour Down Under will be part of the UCI ProSeries, one step below the Women's WorldTour, but will likely continue to attract many of the top-level teams and riders who begin competition in the Australian summer before traveling back to Europe for the spring Classics.

Conte said the elevation to the ProSeries is a big step for the Women's Tour and that the overall goals is to be part of the Women's WorldTour.

"It has always been the goal of the event to elevate the Women’s race to UCI Women’s WorldTour in the coming years and this just puts us one step closer to that," Conte said.

Route details for the fifth edition of the Women's Tour Down Under were announced in July. The race will start in Hahndorf and finishing with an Adelaide street circuit three days later.

Amanda Spratt (Mitchelton-Scott) has won the overall title at the Women's Tour Down Under for three consecutive seasons, while Katrina Garfoot won the inaugural edition in 2016.

The 2020 Women's WorldTour will kick off at the Cadel Evans Great Ocean Road Race on February 1.