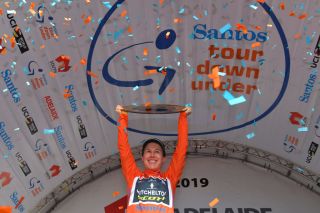 If there were ever an event on the brink of becoming WorldTour it's the Santos Women's Tour Down Under. Upgraded to the 2.Pro Series this year, the event is about to embark on its fifth edition held from January 16-19 in and around Adelaide, Australia.

Amanda Spratt, the country's newly crowned elite women's road race champion, will line up with her Mitchelton-Scott team and attempt a fourth consecutive overall victory. As someone who has raced every edition of the marquee stage race, Spratt is surprised that the event has not acquired a licence to be part of the Women's WorldTour, yet.

"It surprises me that it's not WorldTour already," Spratt told Cyclingnews. "I thought that this was an event that would go WorldTour [sooner] but I also think it has taken it step-by-step. It's still a young event, four years now, so I think each year it grows."

Organisers of the Women's Tour Down Under have consistently put on a world-class event that compares to many, and outdoes some, of the top stages races on the Women's WorldTour. This year's four-day event will be offering live streaming of each stage so that an international audience can tune-in to the action.

Mitchelton-Scott has won every edition of the race beginning with Katrin Garfoot in the inaugural Women's Tour Down Under in 2016. Amanda Spratt has won the overall titles on the three subsequent editions (2017-2019). It shouldn't come as a shock considering Mitchelton-Scott is the strongest team out of Australia and will this year be among the first-ever round of teams licenced as part of the top-tier WorldTeams in 2020.

But the Women's Tour Down Under has historically attracted many of the highest ranked teams in the world because of the warmer southern hemisphere temperatures in January, along with the block of racing offered that also includes the Bay Crits, the new Race Torquay (January 30), Cadel Evans Great Ocean Road Race (February 2) and Herald Sun Tour (February 5-6).

Cadel Evans Great Ocean Road Race will mark the kick-off to this year's 22-round Women's WorldTour. Tour Down Under race director Kimberly Conte said that the overall goal is to become part of the future Women's WorldTour in future.

Six of the eight newly announced top-tier WorldTeams will be on the start line at this edition of the Women's Tour Down Under; Mitchelton-Scott, Trek-Segafredo, Team Sunweb, Ale BTC Ljublhjana, FDJ Nouvelle Aquitaine Futuroscope and Canyon-SRAM. Absent from the start list are CCC-Liv and Movistar Team Women.

Although Trek-Segafredo will be without last year's stage 1 winner Letizia Paternoster, they will field a strong team that includes Lotta Henttala (née Lepistö) and US road race champion Ruth Winder.

Stage 1 from Hahndorf to Macclesfield on January 16 will take the peloton on a 116km race that includes three intermediate sprint in Echunga at 8km, 69.7km and 101.5km. There will be a mid-race QOM over Knotts Hill located at 48.3km but it may not play a factor in the overall classification being so far away from the finish line.

Stage 2 is held on January 17 from Murray Bridge to Birdwood and will offer the field a 114km race with two intermediate sprint located in Kanmantoo (28.5km) and upon entering Birdwood (80km). There is also a QOM positioned near the end of the stage over Christmas Tree Ridge (103.9km). The climb is an average gradient of 3.6 per cent but includes pitches as steep as 11 per cent, and since it is peaks out at just 10km to go, it will likely be a decisive moment in the race for the overall classification.

Stage 3 brings the peloton to Nairne with a finish in Stirling in what is almost a carbon-copy of last year's third stage won by Grace Brown. Slightly longer this year at 109.1km the stage will include two intermediate sprints at Lobethal (22.8km) and Stirling (74.1km), with a QOM over Kywarra Climb (94.4km). The race will include a traditional circuit of Stirling, Heathfield, Mylor and Aldgate for the finish.

The Santos Women's Tour Down Under will conclude on stage 4 with a 42.5km circuit race in Adelaide. The peloton will race on a  1.7km circuit through Adelaide's centre. Starting outside Pilgrim Church on Flinders Street, the peloton turns into King William Street, heads through Victoria Square before turning left into Angas Street, then into Chancery Lane and right into Wakefield Street. They take a left turn at Pulteney Street then back onto Flinders for the long straight to the start/finish line. Intermediate sprints will be held on laps 6, 12 and 18.