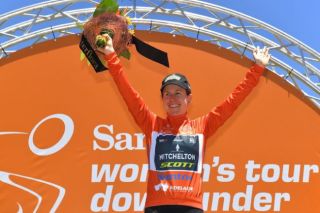 Amanda Spratt is hoping to start the 2020 Women's WorldTour with her fourth consecutive win at the Tour Down under, the 32-year-old Australian's home tour and the first benchmark of the new season.

Spratt took her third Tour Down Under win last year ahead of Mitchelton-Scott teammate Lucy Kennedy after having come second to Sarah Gigante earlier in the month at the Australian road race championship.

Spratt took the leader's jersey on the four-day 2019 race on stage 2, a 116.7km day that finished with a climb up Mengler Hill into Angaston. She held the jersey over the next two days to win by 50 seconds.

Amanda Spratt: It was survival of the fittest at the World Championships

Spratt: It was amazing to have the world number one work for me

“I’ve won three times before and I know in January my form is good, and it is a period of the year where I always want to be in good form, so there’s no reason why I can’t think that I can win again next year and make it a four-peat,” Spratt said.

Spratt' fourth victory would tie Simon Gerrans for the most overall wins at the Tour Down Under men's or women's races, but Spratt would be the first person win four consecutive times.

“I enjoy the pressure of returning as a defending champion, and that pressure is something I have become quite used to over the past two or three years," she said.

“For me it is just exciting to be going there to a home race, and especially Tour Down Under, it is just getting bigger and bigger every year. There’s always so much support, there’s so many people cheering for you, and next year my parents are coming so it will be good to have some hometown support. It is a pretty special feeling; you almost feel famous for that week of the TDU rather than feeling a lot of pressure.”

Spratt's previous wins have relied on devastating attacks on challenging climbs, but the 2020 Tour Down Under route, which includes four stages around the Adelaide area, lacks a defining climb this year. It could leave the race wide open and add more tactics into thee game.

“The course next year isn’t as predictable as the last years,” Spratt said. “Last year with the Mengler Hill finish, you knew that was probably going to be the decisive day for the GC.

"It will still be tough, and I’m sure there will be a few surprises," she said. "It will be very interesting without one main climb where you can put time into people. We will have a strong team again, so I think we can go in to the race thinking we can win.”

Spratt nows she will likely be heavily marked in a race where she won't be able to rely so much on  gravity to help her get separation, but she said the team is strong and will have numerous cards to play.

“All eyes are going to be on me, but maybe there is a scenario where a teammate can get up the road and that can be good for us as well," Spratt said, while acknowledging that a fourth win 'would be amazing'.

"The priority is that the team walks away again with the Ochre jersey.”

The Women'sTour Down Under begins Thursday, January 6, with a 116km stage from Hahndorf to Macclesfield. Stage 2 takes the peloton 115km from Murray Bridge to Birdwood. Stage 3 is 109km from Nairne to Stirling. The race concludes Sunday, January 19, with the stage in Adelaide.