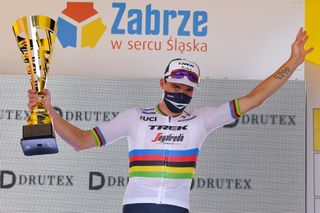 Road race world champion Mads Pedersen (Trek-Segafredo) took his first win in his rainbow jersey on stage 2 of the Tour de Pologne on Thursday, and dedicated the victory to Deceuninck-QuickStep's Fabio Jakobsen, who was the victim of a high-speed crash at the finish of Wednesday's opening stage, and remains in hospital.

"First of all, I want to dedicate this win to Fabio Jakobsen after the horrible crash yesterday. He deserves to come back fast, to life, and to racing," Pedersen said, according to his team's website.

Pedersen benefited from a textbook sprint-train lead-out from his Trek-Segafredo teammates in the final kilometres of the 151.5km second stage between Opole and Zabrze, and although the Dane started his sprint from some way out, he held off the fast-finishing Pacal Ackermann (Bora-Hansgrohe) and Davide Ballerini (Deceuninck-QuickStep) to notch up the 13th victory of his career, and take the race lead overall with three days remaining.

"We did some pretty good teamwork today," he said. "To see how the team rode today was impressive, and then to give something extra in the finale. So I am super happy to take this victory for the team, and for myself, too, and to show this beautiful jersey."

Asked in the post-stage press conference whether he and his colleagues had any nerves ahead of the bunch sprint following Jakobsen's crash the day before, Pedersen made it clear that he, at least, hadn't.

"Stuff like that happens, and it shouldn't. Of course, it touched the whole peloton yesterday, but we all keep racing, keep fighting and hope for the best for Fabio."

Mads Pedersen: I want to honour the beauty of the rainbow jersey

With the Tour de Pologne hitting the climbs on stage 3 from Wadowice to Bielsko-Biala on Friday, with seven 'medium-mountain' obstacles to tackle along the 203.1km route, Pedersen knows that he and his teammates will have their work cut out trying to hold on to the overall race lead, but said that they would give it everything they had.

"Now we want to fight to keep the leader's jersey through tomorrow," the 24-year-old said. "We will do our best. This is a really good way for us to restart the season and keep our fighting spirit going."

Pedersen won his rainbow jersey at the World Championships in Yorkshire last September, and although he has been able to race in it a number of times at the end of last season and earlier this year – as well as at last week's Vuelta a Burgos – he's had far fewer opportunities than a world champion would usually have had to race in it, owing to the sport's shutdown due to the coronavirus.

Providing he's picked, Pedersen should nevertheless get the chance to wear his rainbow jersey at this year's Tour de France, which gets under way in Nice on August 29, and will then have the opportunity to try to defend his world title on a hilly road-race course in Switzerland on September 27.