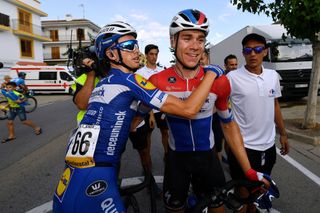 Fabio Jakobsen is in an intensive care unit in Sosnowiec, Poland following a high-speed crash in the final sprint of stage 1 of the Tour de Pologne. His condition has been described by medical staff as stable but he has been placed in an induced coma.

Jakobsen crashed into the barriers at the finish line in Katowice and was immediately attended to by the medical services before being transported to the specialist hospital. The initial report from the race doctor, who briefed the media, described injuries sustained as “very serious” and “life-threatening”, according to naszosie.pl.

The race doctor said that Jakobsen suffered "a very serious head trauma, a crushed palate and upper respiratory tract" and "lost a lot of blood", which made intubation difficult.

"Fabio Jakobsen’s situation is serious but at the moment he is stable. Diagnostic tests didn’t reveal brain or spinal injury, but because of the gravity of his multiple injuries, he is still kept in a comatose condition and has to remain closely monitored in the following days at the Wojewódzki Szpital in Katowice. Further information will be made available in the course of the coming hours. Meanwhile, we would like to thank you for your heartwarming support."

The latest report, aired by TVP Sport, Poland's national broadcaster, at 22:00 local time, quoted the deputy director of the hospital who, in a cautious way, briefed the media and confirmed that radiological examination revealed no injuries to the rider's spinal cord or brain.

"The patient was admitted in serious condition and was placed in an induced coma. We firstly stabilised his cardiovascular and respiratory systems and then conducted radiological diagnosis, which revealed injuries to multiple organs: head and chest.

"Tomorrow, he will most likely undergo a series of surgeries on the facial part of the cranium, which will require doctors specialising in oral and maxillofacial surgeries as well as in plastic surgeries. The time of these procedures will depend on his overall state. He is a young guy, we are expecting him to systematically get better. It is optimistic that apart from the trauma to face and skull, we didn't detect any injuries to the spinal cord in our radiological diagnosis," said Paweł Gruenpeter.

"Anesthesiologists believe that his overall condition has now been stabilised. We need to wait. The next hours are crucial in assessing his neurological condition. The medicines he is being given do not allow for a full diagnosis but are necessary to keep his central nervous system in the right condition. I think that tomorrow morning, if all goes well, we will have more answers," he added.

Jakobsen was declared the stage winner, according to the official results, while Dylan Groenewegen was handed a disqualification for "deviation from the chosen line that obstructs or endangers another rider", the jury statement confirmed. Jumbo-Visma rider was further fined 500 CHF.

No podium ceremonies took place after the finish and the police are now investigating the circumstances and causes of the incident, according to a tweet from the police department for Silesian Voivodeship.

The UCI has issued a statement shortly after the incident, calling Groenewegen's behaviour "dangerous".

However, some riders including Simon Geschke (CCC Team), have pointed their fingers at the race organisation and the UCI for allowing such a high-speed downhill sprint to be included in the race.