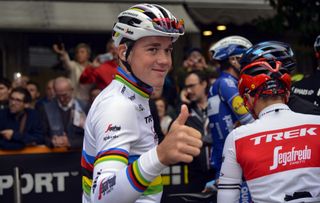 Last September Mads Pedersen was on cloud nine having won the World Championships road race in thrilling style. Ten months on from that memorable day in the Yorkshire rain and the Danish rider isn’t bitter about the coronavirus that has robbed him of the experience of racing in the rainbow jersey, and instead, he’s remaining positive and hungry for success as the season finally re-starts.

The Trek Segafredo Classics specialist returns to action next week at the Vuelta a Burgos and his race calendar for the next few months – assuming everything goes to plan – is virtually non-stop with Pologne, BinckBank, the Tour de France, the cobbled Classic and a return to the World Championships all on the cards. Pedersen is certainly eager to make up for the lost time and showcase his rainbow jersey in as many different races as possible.

“I don’t have to show anyone else that I deserve the jersey,” he told a small gathering of the media via a Zoom call on Sunday morning.

“I won on that day and I deserved it. People ask me if I feel pressure but to be honest, I know that I have a lot of pressure on my shoulders. To be 100 per cent clear the guy who wants to show off this jersey the most and his respect for the jersey, is me. I want to show how beautiful it is, I want to honour it. I want to show that I deserve that jersey.”

Few would argue that Pedersen didn’t earn the right to wear the rainbow bands. On a soggy course in Yorkshire, he was both the smartest and the strongest, and although he wasn’t a pre-race favourite, his win was a breakthrough moment in the young rider’s already promising career. Over the next few months, he will dovetail his own ambitions with those of the rest of this teammates. He will be happy to work for others in races like the Tour de France – where he will be making his debut – safe in the knowledge that he will be well-supported when he lines up for the Tour of Flanders and Paris-Roubaix. And while a Monument win is an ultimate goal, Pedersen knows that his progression over the next few months will not solely come down to his win tally.

“So when people give me shit for working for Richie Porte in Down Under or not trying to do my own thing, I seriously don’t give a fuck. It’s not my problem. I know what I’m doing and I want to honour that jersey. I want to do it in my way and if I’m happy with my results in the jersey, and if I’m reaching the goals that I’m aiming for then no one can be disappointed.”

That’s not to say that the last few months haven’t been tough. Pedersen’s last competitive outing came in Paris-Nice back in March. Since then he’s come through lockdown, kept his fitness in check, and worked on the small things that pro riders have to put to one side during the busy nature of the season. He’s tried to keep positive and use the lockdown experience as a chance to improve himself.

“Mentally it’s not been a problem at all. Of course it’s been super shit to miss the season in the jersey but shit happens and I can’t change it anyway. Mentally I’m ready to race again and the form is where I want it to be. I’ve done some good training here in the last months and I’m just ready to race again and show my jersey and the team’s sponsors,” he says, clearly eager by next year’s return to racing.

“Mentally I’ve definitely learned a lot in the last few months. I learned to keep more focus on myself and believe that what I’m doing is the best way. As it is, if you keep your head right then you would have come out of this stronger.”

Pedersen certainly will not be looking back and feeling sorry for himself as the season begins to open up. All of the Danish rider's targets, like the cobbled Classics, have been rescheduled for later in the year, and every chance of pulling on the rainbow jersey is an opportunity, whether it’s for training for racing.

“I tell people that in ten years you guys won’t remember how many race days I had in the jersey. The only thing you’ll remember is that I won it in Harrogate. That’s what I’m dealing with. I’m just happy that I won a World Championships, and I’m enjoying every time that I can pull on the jersey, whether it’s a one-hour training ride or a six-hour race, I enjoy it. I can’t change Coronavirus or the world locking down like this, but I’m happy that I won the World Championships and I’m going to enjoy the races I have in the jersey.”