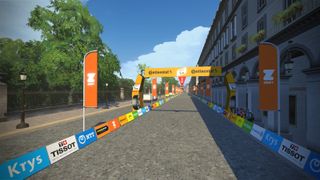 We should be in the thick of the Tour de France but because of the coronavirus pandemic fans have to wait two months before watching Egan Bernal and Team Ineos try to capture another title.

Instead, this weekend begins the Virtual Tour de France: the first two stages for men and women on the Zwift platform.

Zwift unveiled two new worlds just for the Virtual Tour de France, with eight routes including 'Ven Top', a replica of Mont Ventoux; and Paris, home to two routes, both of which traverse a digital replica of the real-world Champs-Élysées.

Teams are able to swap riders for each of the six stage stages depending on the terrain. 2018 Tour de France winner Geraint Thomas will lead Team Ineos on the hilly stage 2, with Rigoberto Uran (EF Pro Cycling) and Nairo Quintana (Arkéa-Samsic) also on the start list.

Watch the Virtual Tour de France – via live stream, no matter your location, with ExpressVPN.

Mathieu van der Poel (Alpecin-Fenix) will make his Tour de France debut on the vitual side on stage 1 and 2, while world champion Mads Pedersen (Trek-Segafredo) will take on stage 1. 2019 yellow jersey wearer Giulio Ciconne will lead Trek-Segafredo on stage 2.

The Virtual Tour de France will be available to watch via Zwift, GCN Racing and Eurosport in Europe.

GCN Racing is available to view for free on Youtube, though it will be region-blocked in some territories. Zwift will – rather obviously – be airing the races on their own website free of charge, too.

NBC Sports Gold will also be showing the race in the USA, with a subscription available for a cut-price fee of $19.99.