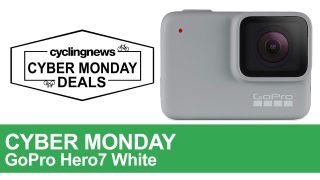 This GoPro deal has been available for a few days now as it was originally launched as part of Amazon's Black Friday sales, but as we roll into Cyber Monday, the deal remains available and it's as good as ever.

The GoPro Hero7 White action camera sees its price slashed on Amazon, and at this price, it's the cheapest GoPro model currently available, so act now to snap it up for a £50 discount.

The camera is a great beginner option for those looking to dip their toe into the world of high-octane photography. It's completely waterproof and lets you shoot at 1080p at up to 60fps.

The entry-level GoPro Hero7 White is aimed at those looking for an affordable route into the action camera world.

The Hero7 White doesn’t feature 4K, only shooting in a wide field of view at 1440p/60fps or 1080p/60fps. Stabilisation is handled by the same electronic system as the Hero7 Silver. Video clips can be shared straight to social media such as Instagram Stories using the GoPro smartphone app.

The Hero7 White features the same waterproofing, same great touch screen and same soft-touch finish as the other more expensive Hero7 models. It is this solid design that separates the Hero7 White from other budget options available on the market.

This tiny GoPro digital camera won't be so cheap for much longer, so click through to find the best deal of the weekend on the GoPro Hero7 White camera.

If you're looking to compare GoPro cameras, then check out our dedicated GoPro deals page. And for an array of deals, head to our Cyber Monday bike deals hub.