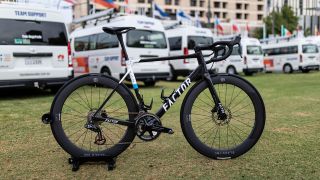 With Thursday's news that Chris Froome will be moving to Israel Start-Up Nation at the end of the 2020 season, the four-time Tour de France champion will undergo a wholesale change in sponsorship of his bike, components, kit and accessories. For the first time in 10 years, Froome will say addio to the Pinarello brand that he's ridden to no fewer than seven Grand Tour victories, and hello to British brand Factor.┬Ā

For at least the next two years, Froome will be aboard Factor Bikes, after the Norfolk-based manufacturer signed a three-year deal with Israel Start-Up Nation prior to the 2020 season.

For the first time in the Briton's career, he will be using disc brakes. Factor supplies Israel Start-Up Nation with two road bikes, both of which are committed to disc brake technology. Its aero road bike – the Factor One Disc – is most often ridden by sprinters such as André Greipel. However, it's the lightweight Factor O2 VAM Disc that Froome will be interested in for his tilt at further Grand Tour success.

One rider who has been using the O2 VAM in 2020 is fellow Briton Alex Dowsett. Cyclingnews got a closer look at the bike ahead of the Tour Down Under season opener in Adelaide.┬Ā

Weighing in at 7.23kg with 60mm wheels, the O2 VAM certainly has the potential to meet the 6.8kg UCI weight limit that Froome will require for Grand Tour mountain days.┬Ā

While there will be some familiarity in the groupset, with both teams sporting Shimano Dura-Ace components, the big change comes with braking technology. Team Ineos is yet to make the leap to disc brakes, whereas Israel Start-Up Nation is committed to the technology for 2020 and beyond.┬Ā

All of Factor's road bikes spin on Black Inc wheels. Dowsett had opted for the Black Sixty 60mm deep all-rounder wheels in Adelaide, but the brand also offers a shallower Black Thirty 30mm climbing wheel, which will no doubt be Froome's go-to on the race-deciding mountainous days.┬Ā

Israel Start-Up Nation is also sponsored by CeramicSpeed, who provides the team with its range of ceramic bearings and OSPW oversized pulley wheel system. This system is claimed to save six to nine watts, a more-than-marginal gain.┬Ā

Israel Start-Up Nation currently uses Bryton Computers, but only as part of a one-year agreement, so there's no guarantee which brand of cycling computers Froome will use next year.┬Ā

In terms of his kit, Castelli will be replaced by Katusha clothing, which is less than one year into a three-year contract with the team.┬Ā

"We're excited. We know he's a very technically orientated rider and it's a great opportunity for us," said a Katusha spokesperson referring to Froome's meticulous attention to detail. "We're a young, small company continually looking for investment during this difficult time, but he'll be a great asset to the company as we try to improve our product range."

Scicon sunglasses will replace the eyewear previously provided by Oakley, and he will switch from Kask helmets to Giro – likely to use the Aether MIPS. Israel Start-Up Nation doesn't have a shoe sponsor, so it seems likely that Froome will continue his long-standing relationship with Sidi, and will likely use the Sidi Shot or Sidi Wire 2 Carbon shoes.