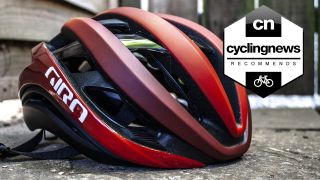 Founded in 1985 by Jim Gentes, Giro pioneered the concept and contributed to the prevalence of bicycle helmets in the peloton before they eventually became compulsory.

Jim’s love affair with cycling and design gave rise to the original Giro Prolight. It was avant-garde at the time, featuring both ventilation and aerodynamic properties, lightweight EPS-foam construction and a design that appealed to the masses.

Long before helmets were made compulsory by the UCI, Giro was already an established brand, having celebrated major success throughout the ‘80s and ‘90s. It was Greg Lemond who showcased the aerodynamic and performance benefits of the helmet - the Giro Aerohead, when he famously snatched the yellow jersey from Laurent Fignon in the final time trial of the 1989 Tour de France.

The past decade has seen helmet technology progress even further with lighter, brighter and safer technologies coming to the fore, such as MIPS, a Swedish innovation that protects the brain against the rotational motion caused by crashes or collisions.

It comes as no surprise that Giro was an early adopter of this technology having worked together with MIPS in developing ways to make its helmets safer and more comfortable to wear.

Coming in below the £100 threshold and offering stellar looks and a great fit, the Syntax is Giro’s best-kept secret

The Giro Syntax belies its £100 price point. Offering a host of features usually reserved for helmets twice its value, the Syntax stands head and shoulders above its rivals, particularly in the safety department – MIPS is standard fitment.

Six premium colourways are available to match any style or preference. Visually, the Syntax looks aggressive with 25 large vents that provide both an aerodynamic and cooling effect.

Like most helmets in the Giro range, it benefits from the Roc Loc/MIPS retention system. At 260g (medium), the Syntax also represents a happy medium in terms of weight coming in lighter than the more premium Vanquish.

From aesthetic to fit and function, Giro’s top-end road helmet ticks every box

Sharing a large portion of its design DNA with the Synthe, the Giro Aether represents the zenith of Giro’s contemporary road helmet range.

The key differences between the Aether and its siblings is the manner in which Giro has managed to seamlessly combine attributes such as performance, comfort and safety.

It employs the latest iteration of MIPS called Spherical technology: a two-part, dual-density foam built-in to the helmet that redirects energy during angled impacts.

The Aether follows very much a form-over-function approach in terms of aesthetics, with shatterproof, transparent arches running perpendicular to the venting slats for improved structural integrity and visual clout.

It’s slippery, looks menacing and comes with a removable Zeiss magnetic-shield lens. What’s not to like?

The Giro Vanquish is an out-and-out race helmet offering improved aerodynamics and a comfy fit. It also uses MIPS, which has been neatly and effectively integrated into the Roc Loc Air fit system so as not to alter the fit.

Designed to deliver greater depth and contrast to your vision, the removable Zeiss-developed lens can be stowed away by flipping it upside down or ditched entirely for regular shades, it’s your choice.

The progressive design has positioned it more as an everyday lid rather than an event-specific helmet, but the lack of ventilation could pose an issue when used throughout the warmer months.

Five years down the line, the Giro Synthe still looks, feels and performs like a segment-leader

It might be over five years old already, but the Giro Synthe has earned a reputation for its stellar looks, comfortable fit and performance-orientated bent.

Featuring no less than 26 cooling vents Giro claims it’s more aerodynamic than the esteemed Air Attack, the predecessor of the Vanquish — which comes down to the use of some clever airflow trickery around the helmet’s frontal area.

The biggest drawcard is the improved Roc Loc Air fit system which supplies three different height positions to accommodate a broader range of head sizes as well as a better fit with less restriction around the contact areas.

The Synthe’s proven reputation at the pinnacle of the sport makes it a no-brainer for those looking for marginal gains.

A cheaper and worthy alternative to the mighty Giro Synthe

The Cinder offers a lot more than a comfortable fit. For starters, it looks more like a Synthe 2.0 than brand-new design but closer inspection reveals several cost-cutting differences like Giro vinyl stickers and the absence of honeycomb mesh on the flanks. But to dismiss the Cinder based purely on a few visual discrepancies could be considered a mistake.

Utilising a Roc Loc 5 retention system, the Cinder is close to Giro’s best-fitting helmet thanks in part to the MIPS cradle system slotting in behind the foam padding.

At over 300g, it’s a little on the heavy side but what it gains in grams it makes up for in style, performance and fit.

Increased protection rides that take on more than tarmac

The Agilis MIPS steps beyond the road, combining design cues from the Synthe and Giro's mountain bike range to create a road styled helmet with increased levels of protection. This extra coverage extends down the rear of the helmet for protection against impacts caused from rocks, roots and other off-road debris.

As expected Giro's Roc Loc system is used for retention and the helmet utilises MIPS to address rotational-impact forces. The vents may be smaller compared to other Giro offerings but they are plentiful with 36 slats positioned across the helmet and linked up with internal channelling.

Multi-directional Impact Protection System, or MIPS for short, is the brainchild of Swedish neurosurgeon Hans von Holst, who together with Peter Halldin (a researcher at the Swedish Royal Institute of Technology), discovered that moderate motion between two low-friction surfaces in a helmet could significantly reduce rotational motion injuries. This discovery was a game-changer for the industry and has since become a staple feature on all but two models in Giro’s current range of helmets.