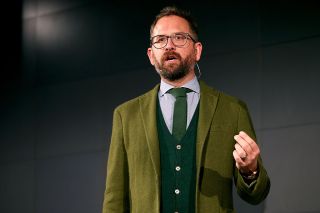 On Tuesday, the UCI – in conjunction with several leading race organisers – unveiled their plans to rescue professional cycling from the abyss. They proposed a new-look race calendar that included three Grand Tours in the space of 71 on days, and a stack of Monuments and other WorldTour races included for good measure.

While the disclosure of a new race plan that also incorporated the women’s WorldTour, and the introduction of a women’s Paris-Roubaix, was met with relief in many quarters, the fact remains that cycling is no closer to normality - or the new normal that has been coined in recent weeks. In reality, just because someone in Aigle can party plan on Google docs and send out the necessary invites, that doesn’t mean that the governing body will decide the when, where or how racing resumes.

Jonathan Vaughters from EF Pro Cycling welcomed the prospect of racing resuming but he was suitably cautious when it came to devising a calendar. The former rider told Cyclingnews that he would have preferred a more focused schedule rather than the bloated version that may expand further once the non-WorldTour races are factored.

“If I was the UCI and the race organisers, and there’s a lot of insurance issues that they’re dealing with, but if we put the insurance issue aside for a minute, I would back way up and say what can we really do? What’s really achievable and what can we standby right now and say it’s got a better than 70 per cent chance of happening?” Vaughters said.

“I would simplify that schedule a lot. I would have time between the events so that there’s time to deal with immigration and testing.”

As of yet, neither the UCI nor the key race stakeholders have come forward with a detailed plan on testing protocols or measures. That’s because they don’t yet have one. As governments around the globe have seen over the last few months, the coronavirus pandemic is a moving target and until there is widespread testing and a vaccine, measures on containment will have to be flexible.

The merits and fears of holding sporting events behind closed doors – and by that we mean stadiums, rather than what we saw at Paris-Nice earlier in the year – are still being negotiated and debated, while several soccer leagues in Europe have already admitted defeat in their quest to see out their 2019/20 campaigns.

Cycling is a far more difficult entity to manage. For starters, there are issues of immigration and therefore quarantine. Each country has its own rules on those two matters, while the idea that sporting superstars should be given preferential treatment over testing while people around the world struggle for medical care raises important ethical questions in itself.

On a practical level, races flow from destination to destination, and while some of those risks have been mitigated with routes that remove the crossing of international borders, the mere idea of staging sporting events that travel has seen leading experts raise several questions.

For Vaughters, the UCI has tried to cram too much into too small of a space, and it has done so at a time when the sport’s governing body should be ensuring that only a handful of race targets are considered for safeguarding.

“I would concentrate on the most important races and make sure that they were able to run because I think that overreaching is a real risk right now,” Vaughters told Cyclingnews.

“To me and most of the teams, we’re going to be pretty happy if we do the Tour de France and two or three of the Monuments. Everyone would be happy with that. Let's just make sure that we race this year and do some good races. Let's not worry about the quantity, let's worry about the quality. Getting the Tour de France is going to take an enormous effort and looking at the calendar, the Tour is overlapping with Tirreno. Whatever we do I want to make sure that we do it. Our eyes shouldn’t be bigger than our stomachs.”

The travel and quarantine restrictions that are currently in place in several countries in Europe would make racing virtually impossible at the moment. Even if there is a lifting of restrictions – and assuming they’ve not lowered again due to a second wave of the virus – teams will have the tricky task of plotting safe travel and health for their riders. Such an undertaking looks even more challenging when the UCI have at times placed three WorldTour events on the same day in the revised calendar.

“Of course, we’ll do our best to be ready, and of course we want to race. There’s no question about that and all our guys are chomping at the bit to race but the reality is that the situation changes every week,” Vaughters said. “One week, one government will close this down and then the next week it will be opened, while immigration will be permitted and then won’t be permitted. I won’t see the racing calendar concrete until we’re a few days out,” Vaughters said.

"Most of our guys remained in Europe, but we have guys in Colombia and North America. This is the first time the guys have been able to ride on the road for a long time. That’s step one and we’re starting to transition their training. As far as immigration and quarantine goes, we’ve looked at it, but it’s the same as racing in that we don’t know where those two aspects are going to be in a few months’ time. For us to do everything that the UCI is proposing right now, everything is going to be opened back up. The way it’s set up right now, I just don’t have enough information to say whether it’s possible or not.”

And while everyone would agree that it’s the governments, and not the UCI, who will decide on whether racing takes place, it’s ultimately up to the riders to decide if they want to take part in events that will come with an element of risk.

Most riders, one assumes, will be desperate to compete. Some will have contracts to renew, others will simply want to get back into the swing of their normal racing lives, but it would be unfair to place athletes as mere pawns for the public’s entertainment. Vaughters has stressed that his team will race only when EF Pro Cycling’s medical staff and riders are in agreement that it’s safe to do so and if the proper protocols are in place.

“I have no idea what the protocols are going to be. For me, the calendar as it is looks like a first draft. There’s a lot of speculation based on the best information right now but one of the lessons that we learned during the whole Tirreno and Paris-Nice period was that we shouldn’t make any decisions until you’re 24 hours out from the event because things just change so quickly. I don’t know if things will be that much different once we get to August,” he said.

“Obviously, we’ll have more information, but as of right now our logistics team and our coaching team are looking at this and thinking ‘okay this is a good optimistic sentiment from the UCI and we’ll take it into account,’ but there’s no absolute concrete information that we’re going to do those races and there’s no information on what the protocols are going to be. I think that we’re a long way off from being able to make any real decisions with any of that.

"It’ll be the same as with Paris-Nice with us. This year, being pretty exceptional, we’ll give the medical staff and the riders the ultimate say on whether they race. From a managerial decision, we’ll decide if we think racing is a good idea but in the end if it comes down to the medical team and if they think that the protocols are good, and if the riders say if they feel comfortable doing the race. That won’t change.”

Does cycling change or is it simply the same old song, different tune?

Trying to force roughly 80 per cent of the WorldTour calendar into three month looks optimistic at best, and the introduction of a women’s Paris-Roubaix, while sorely needed, will need to actually happen in 2020 and 2021 before all of these measures can be dressed up as anything more than tokenistic.