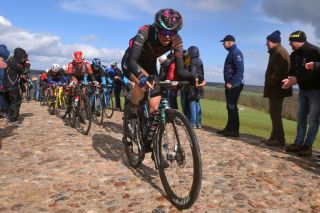 The UCI announced Tuesday a revised 2020 Women’s WorldTour calendar, a replacement for plans that were halted due to the coronavirus (Covid-19) pandemic. The top-tier series has retained 18 of the 22 events, now set to take place from August 1 to November 8, and includes a surprise addition of an inaugural women’s Paris-Roubaix.

"I do believe that [hosting a revised calendar] is crucial for our sport," Lappartient said in an online interview conference with international journalists on Tuesday.

"Of course, having a 2020 season will be a big challenge for some teams, but if we don’t have a 2020 season, it will be an even greater challenge and we will probably lose more teams. That is why it is crucial to have this 2020 season and why we are pushing so hard to have all these potential races.

"On the crisis, in the stakeholders meeting, we have always been on the same line, always by unanimity. It was a challenge, however, regarding the calendar and all the decisions we took during this period. All of them have been by unanimity between the UCI and the three families: riders, teams and organisers. This crisis has brought some unity around the table."

The COVID-19 coronavirus has hit the women’s calendar particularly hard, with 14 of the top-tier 22-event Women's WorldTour races initially being either cancelled or postponed. The UCI has suspended racing for WorldTour men's and women's events until August 1.

The majority of the major races were salvaged in the late-season calendar, however, with the exception of three events forced to cancel: Ronde van Drenthe, Trofeo Alfredo Binda-Cittiglio and Women’s Tour in Britain.

Lappartient stressed that the published revised calendar remains highly dependent on the development of the COVID-19 virus along with the health precautions and guidelines stipulated in each nation.

"We are fully aware that the situation is moving worldwide and that nobody knows what will be the exact situation in two or three months," Lappartient said. "Maybe we could be in a situation where there is no cycling - that could be a scenario, and we are fully aware of this. However, we believe it’s under our mission to prepare a second part of the season, if we are able to have the second part, and we hope so."

The published revised UCI Women’s WorldTour calendar will start on August 1 with the Strade Bianche and finish on November 8 with the Ceratizit Madrid Challenge by La Vuelta.

The series will host 18 events that include five stage races, including a shortened Giro Rosa (September 11-19). There will also be 13 one-day races including La Course (August 29), the three Ardennes Classics - Flèche Wallonne (September 30), Liège-Bastogne-Liège (October 4) and Amstel Gold Race (October 10) - along with Tour of Flanders (October 18), and the new Paris-Roubaix (October 25).

Lappartient has been a long-time supporter of a women’s Paris-Roubaix, two years ago expressing that it was his dream to see ASO host a women’s version of the iconic men’s Classic. He said that the UCI put pressure on ASO to host the one-day race for women during the late-season calendar in a push for gender equality.

"It is good for us to see a women’s Paris-Roubaix. It was in the pipeline and I was pushing very hard [for the race], and I’ve had some very productive discussions with ASO," Lappartient said.

"They also believe that it’s a great opportunity for women’s cycling. I said, 'look, we launched the reform of the Women’s WorldTour this year with the new WorldTeams. However, it’s challenging for this new-start for the [series] so if we could have some [sunlight] in this that could be nice'. We believe that Paris-Roubaix is one of the greatest Classics in the world, and for me, there is no reason not to have a Paris-Roubaix [for women].

"We had good reception from ASO, and for us, it is a matter that gender equality is moving the right way. It’s really moving with the new Women’s WorldTour and teams, and moving with races like this one, and we hope moving with some big stage race, that we need. So, yes, [having a women’s Paris-Roubaix] is very nice and I saw some comments on social media that were very positive.

"I believe that for women it is important to have the same opportunity for men."

The revised women’s calendar will see an overlap, something the UCI has tried to avoid in the past, between the Classics - Driedaagse Brugge-De Panne and Paris Roubaix - and the Tour of Guangxi and Tour of Chongming Island, both held in China. Lappartient said the two events in China are still in the discussion phase because the government has not yet agreed to open health restrictions to sporting events. If the events go forward, it will provide more options for Asian teams to compete.

The UCI announced in April that the new dates of the Tour de France would be held from August 29 to September 20. However, ASO could not confirm the new dates of its one-day women’s race La Course. ASO and the UCI have agreed to move the event to the beginning of the Tour de France, on August 29 in Nice, rather than it’s original spot that was in conjunction with the final stage of the men’s race in Paris.

"This has been discussed with the UCI. We don’t know what the format will be in Paris, which is also potentially challenging, so it’s nice to have this race in Nice."

Part of the Women’s WorldTour reforms included a requirement for event promoters to host 45 minutes of live TV. Lappartient confirmed that this requirement will remain part of the revised calendar, although he warned of some instances of overlap with other sports.

"The 45 minutes of live TV is still on the guidelines for the organisers and we want to stick to this," Lappartient said.

"Maybe we will have to adapt a little bit because in the race season sometimes there are overlaps with the men and with other sports, and that’s also a challenge because other sports will also be back in September - we hope so. It’s still in the guidelines to maintain and stick to this 45 minutes of live."

The UCI also confirmed that for Women’s WorldTour events, the maximum number of riders can be fixed at five (compared to six or seven usually). This measure will enable organisers to invite more teams (a maximum of 26 compared to 24 normally).

In addition, all UCI Women’s WorldTeams will be able to participate in C1 category events, and the allowance of three teams for C2 events is increased to five.