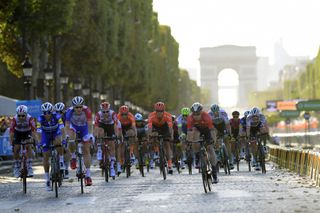 The French minister for sport, Roxana Maracineanu, said on French radio on Wednesday evening that she recognised that France-based professional riders will need to start training outside in order to be ready for the Tour de France, if it's to start, as hoped, on August 29.

Pro riders living in France have not been allowed to train outside since mid-March, but that ban is set to be lifted from May 11, although riders will still only be allowed to train alone at that point.

On Thursday, the French government confirmed that, from May 11, citizens will be able to partake in exercise outdoors so long as they respect social distancing measures. Cyclists are required to respect a minimum distance of 10 metres between one another, but they can travel up to 100km from their residences, with no time limit on periods of exercise.

According to a report in L'Equipe on Wednesday, Maracineanu also told France Info that riders needed to race, or at the very least train in groups, before the start of the Tour, and also recognised that the survival of a number of pro teams could hinge on their ability to take part in competition.

Tony Martin: No Tour de France would be disastrous from a commercial point of view

"I think that athletes are desperate to be able to train again properly, and that cyclists are very keen to get off their home trainers and to ride their bikes more than just a kilometre from their homes. They will be able to resume training," she told France Info.

Maracineanu now appears to have sided with the riders' – and their teams' – hopes that the Tour de France will be able to take place this year, with the UCI and Tour organisers ASO having proposed the new dates of August 29-September 20.

On Wednesday, the UCI was expected to announce a fuller calendar of events, to also include the Giro d'Italia, the Vuelta a España and the one-day Classics, but that announcement has now been put off until at least May 5 as the coronavirus crisis continues in Europe.

The knock-on effect of the lack of a calendar means that it remains unclear whether pros will be able to race any events ahead of the proposed start of the Tour.

Maracineanu raised hackles last week by stating that it "won't be the end of the world" if the Tour doesn't take place, but later clarified that she was comparing it to the difficulties of the coronavirus crisis faced by society, and admitted that she'd downplayed the importance of sport for many.

"Among all the challenges our society faces, evidently the return of sport is a major topic. I've been working on it daily for weeks. But health remains the priority," she said last Thursday.

Speaking again on Wednesday, Maracineanu said: "For the Tour de France to take place, a few things need to happen. There need to be some preparatory races, and cyclists need to be able to ride together in a bunch, and that's not possible at the moment.

"For now, the social distancing requirements imposed on the rest of society also still apply to riders," she said. "Today, there are all these uncertainties that still exist due to the continued pandemic.

"The riders must be able to resume training alone, and then in a group, and to then be able to take part in preparatory competitions for the Tour de France," Maracineanu reiterated. "I am aware that all of this happening is also essential to the survival of many professional teams."