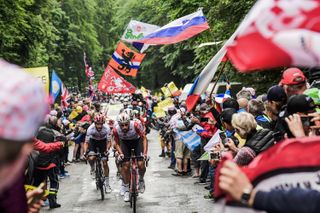 The 2020 Tour de France has been rescheduled for August 29 to September 20, the UCI and organiser ASO announced on Wednesday.

The news followed a video conference between the UCI and representatives of race organisers, teams and riders in which it was also confirmed that all racing has been suspended until at least July 1 due to the coronavirus pandemic.

The new dates for the Tour will have a knock-on effect on the Vuelta a España and the postponed Giro d'Italia. The UCI said the events will now take place after the World Championships, which remain on the calendar from September 20-27.

The Tour was originally scheduled to take place from June 27 to July 19, dates that became untenable earlier this week when French president Emmanuel Macron extended the current ban on public gatherings until mid-July.

ASO acknowledged as much in a statement to AP on Tuesday evening before outlining a new date for the race on Wednesday. The route remains the same as that unveiled in Paris last October, with the Grand Départ set for Nice on August 29 and a time trial to La Planche des Belles Filles on the penultimate day on September 19.

Tour director Christian Prudhomme appeared on Le Journal de 13 heures, the lunchtime news bulletin on France Télévisions, to confirm the rescheduled dates of the 2020 Tour. If the race does eventually go ahead, it would be the latest date on which it has ever taken place. The latest Tour finish in history came in 1908, when Lucien Petit-Breton claimed his second successive victory in Paris on August 9.

"The Tour will take place two months later than planned. It’s never taken place so late before in its history, but it will take place from August 29 to September 20 and on the same parcours," Prudhomme said. "I had 49 elected officials from the host towns on the phone yesterday and they all gave their support."

France is currently in a state of lockdown and the country has reported more than 15,000 deaths since the coronavirus pandemic began. It remains unclear if the 2020 Tour will ultimately be able to take place on the planned dates - or at all - but Prudhomme looked to posit the event as a symbol of recovery.

"It’s the first big event planned, the beacon that allows us to look to the future and say, 'yes, we’ll get through this,' even if right now, everybody must fight," Prudhomme said.

The coronavirus pandemic has already seen many major sporting events postponed until 2021 or cancelled altogether. The Tokyo Olympic Games and the Euro 2020 and Copa America football tournaments have been put back to the summer of 2021, while this year’s edition of Wimbledon has been cancelled.

The revised date means that the final stage of the postponed 2020 Tour would clash with the elite men’s time trial at the UCI World Championships in Martigny, which the governing body said remains on the calendar, and with the same schedule, from September 20-27.

It also means that the Vuelta a España will be compelled to move to a later slot. The UCI did not outline specific dates for the other Grand Tours on its provisional calendar beyond noting that the Giro d’Italia "will take place after the UCI Worlds and will be followed by the Vuelta Ciclista a España".

The UCI has previously indicated that the 2020 season will be extended into November in a bid to allow postponed races, including the Spring Classics, to be held.

The economic importance of the Tour de France to teams and their sponsors has ensured that it has been given precedence over every other race in the revised UCI calendar. Writing in Het Nieuwsblad last month, Deceuncink-QuickStep manager Patrick Lefevere outlined the weight of the Tour: "If there is no Tour de France, the whole model of cycling can collapse. ”

Prudhomme previously dismissed the idea of the Tour de France taking place behind closed doors, but he said on Wednesday the race would respect any social distancing measures still in place in France in late summer.

He pointed to the example of Paris-Nice, the last WorldTour race to take place before the coronavirus pandemic brought the cycling calendar to a halt. In the final days of the race, spectators were barred from stage starts and finishes.

“That’s what we did at Paris-Nice, because we had to adapt then,” Prudhomme said. “The Tour in its new dates is now four and a half months away so we still have the time to see how things unfold. I can only confirm that we’ll follow all the recommendations. I hope not just for the Tour but for our country that we can live more freely by then.”

ASO had initially considered a summer date for a postponed Tour de France, but Prudhomme told L’Équipe on Wednesday that the organisation was persuaded to move the date “as far as possible” following consultation with UCI medical director Xavier Bigard and the French ministry of sport.

France’s ongoing COVID-19 lockdown was this week extended until May 11, and on France Télévisions, Prudhomme pointed out that the preparation of many riders in France and beyond is currently curtailed by confinement measures in their own countries.

“You need 4 or 6 weeks of training on the road for the riders and then another month or so of preparation races – like the Critérium du Dauphiné, which I hope will take place, most likely shortened, before the Tour,” Prudhomme said. “But you need the riders to be able to train first, because they’re in lockdown like everyone else.”