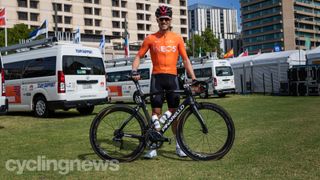 Rohan Dennis (Team Ineos) is ready for the 2020 Tour Down Under (Image credit: Colin Levitch)

The second in our new series on Cyclingnews, we caught up with Team Ineos' new world champion to take a look at all of his new team kit for 2020.

After a contentious departure from Bahrain Merida, Rohan Dennis has found a new home aboard the black Pinarello of Team Ineos. After a second place in the Australian national time trial championships behind Luke Durbridge a couple of weeks ago, Dennis will take the role as the team leader in his first WorldTour outing of the 2020 season here, in his hometown of Adelaide, at the Tour Down Under.

Ahead of today's five-hour planned recon ride, we caught up with Dennis to take a closer look at his new team's kit.

While Dennis' race days will see him sporting the black and red Team Ineos livery, an interest in safety sees the training kit take on a slightly less subtle hue. The bright-orange jersey is the only differential from the norm, as everything else remains race-ready.

Like the entire Ineos team, Dennis will be riding aboard the Pinarello F12 X-Light for the 2020 season, bucking the disc-brake trend that seems to be sweeping the peloton.

Dennis' switch to Team Ineos sees him sporting Kask helmets for the 2020 season. For today's ride, he's opted for the Kask Protone, but the Italian helmet manufacturer also supplies the team with its Valegro lightweight lid, and the Utopia aero helmet.

Sunglasses come courtesy of Oakley, and while Dennis has been trying out the Oakley Sutro at a recent Ineos training camp, today's eyewear of choice is the Oakley Radar EV Path with the Prizm Road lens.

As for his reasons, Dennis gave a simple answer: "They're comfortable for my head shape, and they don't slip off."

Dennis might need those sunglasses for this jersey. The team's new bright orange training jersey is the Castelli Squadra – a short sleeve jersey that, according to Castelli, has a weight of 167g and is suitable for use in 18°-32°C / 65°-90°F.

The five-font, graphic-design-faux-pas that is the Ineos logo sits in pride-of-place across the chest and shoulders, complemented by the Pinarello and Castelli logos.

Bibshorts also come courtesy of Castelli, and although the Italian clothing company makes the Volo bib short in Ineos colours, Dennis has opted for the more premium Free Aero Race 4 bib shorts. The Ineos logo is also displayed on the legs, with the Castelli and Pinarello logos given real estate on the lower legs.

Many of the WorldTour teams are supplied by a single shoe manufacturer, and in an area where comfort is paramount, riders can be forced to choose between discomfort and unhappy sponsors. Team Ineos isn't one of those teams. Geraint Thomas wears Fizik, Chris Froome and Egan Bernal wear Sidi, and, for today at least, Dennis has found solace in Giro shoes, with the Prolight Techlace.

Dennis explained: "They're comfortable. I've also now got a fit-kit thing – it's a thing Adam Hansen [Lotto Soudal] made. It's like a mould of the front so it's easy to fit cleats. Just put [the shoe] on the front, [get your cleats in the] same spot every time.

"I may be using his shoes soon, though."

The Australian time trial champion's power numbers come via a Shimano Dura-Ace crank-based power meter, and heart rate is the responsibility of the Garmin HRM-Dual heart rate monitor. Both are displayed on the Garmin Edge 830 cycling computer.