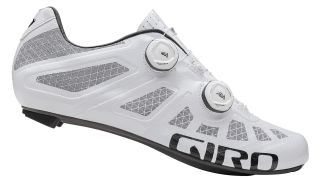 Often overlooked, cycling shoes are quite easily the single most important piece of kit after the helmet — after all, they represent one of only three contact areas your body has with the bike.

Giro quietly entered the shoe market in 2010 with a four-pronged product line-up comprising the Prolight SLX, Factor, Trans and Espada (women-specific). Giro’s strategy, based around lightweight materials, dynamic designs and affordability, helped it secure a significant slice of the market in a very short space of time.

Nine years later, Giro is now a major force in the cycling shoe market thanks to Eric Horton, Giro’s creative director, who has single-handedly ensured every model range since 2010 is lighter, stiffer and more stylish than before. The company also still uses the original Prolight and Trans monikers in the current line-up, which further bolsters its heritage and status as a reputable brand.

Over the years, Giro has experimented in-depth with various shoe fastening systems, as it’s one of the easiest ways to reduce weight. These systems have included everything from laces and Velcro-straps to ratchet buckles and the Techlace (lace/velcro system). Only recently has the Boa fit system been adopted on certain models, which started in 2016 with the Factor Techlace.

Giro has taken things up a level or two with its all-new halo model — the Giro Imperial, a dual Boa, lightweight masterpiece aimed at the purist.

What to look for in a road shoe

The cycling shoe has come a long way since the early years where heavy, leather lace-ups were the order of the day. Nowadays, there is a vast range of products constructed from a variety of materials that meet the needs of even the most ardent cycling aficionados. Carbon soles are of course a high priority for most riders but many forget that fit and comfort are just as import as stiffness index. While sizing discrepancies between brands can pose an issue, the following three factors should be taken into account before making a decision: the stiffness of the sole, the fastening system and weight — each of which will have a significant bearing on price, performance and comfort.

The Boa fit system has become the gold standard for cycling shoes across the spectrum. Available in single or double configuration, Boa systems offer micro-adjustability on the fly thanks to the easy click-by-click functionality of the dial.

The Techlace is a Giro-engineered concept that combines a traditional lace with a Velcro strap offering superlative comfort, on-bike adjustability and weight-saving performance.

Despite the rise of more sophisticated fastening systems, laces are still very popular among cyclists and for good reason: laces are light, stiff, robust and stylish but on-the-bike adjustability is limited.

The Velcro strap featured on Giro’s first range-topping shoe, the Prolight SLX. Apart from the obvious weight savings they offer, the straps do tend stretch over time and the Velcro is prone to contamination.

Utilised on the lower-end of Giro’s shoe range, the ratchet system might weigh more than other fastening devices but the reliability and on-the-fly adjustability more than makes up for it.

The Giro Imperial may not be the lightest model in the line-up - that spot is reserved for the Prolight Techlace - but at 215g per shoe it’s certainly no heavyweight. As Giro’s Halo model they mark the most performance-focussed shoe the company has ever made. Despite the obvious visual similarities it shares with the Prolight, the Imperials feature a twin-Boa retention system, Easton EC90 SLX outsoles and new uppers made from a lightweight mesh material and reinforced Teijin. The new materials do more than just add to the Imperial’s subtle, minimalist aesthetics, it provides a combination of support and ventilation. The Imperials are available in three colours: black, white and red.

In a segment obsessed with Boa dials and space-age materials, the Giro Empire represents the complete antithesis with a design philosophy based solely around the use of laces. First introduced in 2012, they’ve injected a sense of romanticism back into cycling with many professionals having fallen in love with its simplicity and classic aesthetics. What the Empire lacks in adjustability, however, it gains in low weight — at 175g a shoe (SLX) they’re very light thanks to the use of Easton EC90 SLX carbon fibre soles, titanium bolts for the heel pads and, of course, the laces. The range features myriad styles including a knit version and an updated SLX model that uses a combination of mesh and Teijin TPU uppers.

The Prolight Techlace might have only recently been usurped by the Giro Imperial as the brand’s range-topping model but that doesn’t mean it’s any less impressive. In fact, bar the triple-Techlace fastening system and TeXtreme carbon outsoles that have helped to considerably reduce its weight to a scant 160g per shoe, there’s no real difference between the two from a structural perspective — both models benefit from the same mesh-reinforced Teijin TP uppers and similar visual treatments. The Techlace closure system is quite brilliant in that it can be adjusted on-the-fly, and is way easier to put on or take off compared to traditional lace-ups.

Another high-quality, race-bred offering, the Factor Techlace sits below the Prolight and Imperial in Giro’s road shoe hierarchy. As a high-performance shoe, it gets a hybridised meld of Boa dial and Techlace functionality which bestows it with a more balanced and articulated fit. Colour options are limited to black, white or luminous yellow — not the greatest spread but balanced enough to appeal to most tastes. What makes the Factor Techlace such an appealing proposition is how it manages to deliver a near-perfect combination of stiffness and comfort. It’s also incredibly light which will help it find favour with the weight weenies.

Lightweight in construction and progressive in design, the Sentrie Techlace represents the third and final model in the Techlace range. It benefits from premium features too including an Easton EC70 carbon sole, which is stiff but still allows for an element of comfort. The Sentrie’s most endearing attribute is without a doubt what it offers in the looks department — combining a textured, black rubber casing around the Techlace bed with contrasting microfibre uppers, it stands out prodigiously from its rivals no matter which colour combination is selected. At 245g per shoe, it’s considerably heavier than the other Techlace variants but it’s also notably cheaper.

The Trans Boa punches well above its weight, bringing carbon-soled stiffness and Boa functionality to a lower price point

Giro’s Trans moniker has been around for some time now and has subsequently earned a reputation in both the racing and recreational spheres as a solid, all-round option. The Trans Boa builds on these principles by adding a Boa/Velcro fastening system to the package for a secure and improved fit. It also benefits from an Easton EC70 carbon outsole (with replaceable heel pads) for better power delivery. Power transfer is naturally immediate with very little if any flex, making it ideal for competitive riders looking for an added edge.

Further down the list is the regular Trans E70 model, which adds another level of affordability to the package by ditching the Boa dials for a traditional ratchet system.

Utilising a single Boa dial and Velcro strap, the Savix represents a solid, middle-ground option for the competitive cyclist

As a middle-of-the-range option, the Giro Savix punches well above its weight in terms of performance, comfort and aesthetics. Utilising a single Boa dial and Velcro strap fastening system, the Savix bears an uncanny resemblance to its Trans Boa sibling but forgoes the carbon inclusions. In an effort to keep costs down, the Savix uses nylon outsoles which may look and feel stiff, but the moment an excessive load is put through the pedals, they have a propensity for flexing. Despite this fact, the Savix provides a worthy option for intermediate-level riders looking for a good-looking, affordable shoe with Boa-dial functionality.

Despite using a ratchet buckle and Velco fastening system, the Giro Apeckx road shoe has a very premium feel about it — in fact, many of its entry-level rivals fail to elicit the same sense of sophistication. Two distinct colourways are available: white and black, which complement the shoe’s form and multi-textural design. Designed with comfort in mind, the Apeckx provides a fairly decent balance between stiffness and comfort but the added pliancy does come with a weight penalty. As a base model in the Giro range, the Apeckx trades carbon fibre for nylon outsoles but this has done little to affect performance; flex is negligible.

Coming in well below the £100 marker, the Giro Techne is a bargain, budget shoe which hits all the markers

At first glance, it’s difficult to tell the Giro Techne apart from the shoe that started it all, the 2010 Giro Prolight SLX. This trickle-down technology has resulted in some good-looking cycling kicks with the pedigree to match. Sure, there’s no fancy Easton carbon outsole (the Techne uses nylon sole) or space-age materials but the fuss-free design and three-strap Velcro system is almost identical to that of the original Prolight concept. The Velcro straps offer a tight, secure and comfortable fit, and help keep weight to a minimum. It’s also compatible with both two- and three-bolt cleat patterns bolstering its appeal to a broader spectrum of riders.