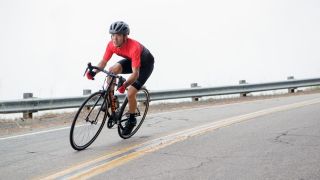 Ride local during lockdown, instead of venturing far and wide (Image credit: Giant)

Most of the cycling world is now fully immersed in indoor cycling on platforms such as Rouvy, TrainerRoad and Zwift due to severe lockdown.

The feel of tyres on tarmac or gravel, reverberating the texture of terrain through your bike’s touchpoints (handlebars, pedals and saddle), are but a memory for most.

How to race on Zwift

Many European countries have banned outdoor exercise altogether, but there are still locations where cyclists are still permitted to ride; USA, Canada, Sweden and the United Kingdom among them. All these locations have excellent riding and powerful cycling communities. But what classifies as too much riding, outside, in a time of COVID-19?

Places where cyclists are allowed to ride ‘free’ confer full responsibility onto individuals. In Canada and certain parts of the United States, you can ride as much as you like, while the United Kingdom government has requested riders to be ‘sensible’ and partake in a single form of exercise per day.

But what is an appropriate riding distance during the global COVID-19 pandemic?

The best practice theory has been that cyclists who remain keen on training and harvesting the mindfulness of riding outdoors, should limit themselves to an hour a day. As with nearly anything else during this crisis, the issue is more complicated.

It is an unhappy reality that many cyclists are now at home, having been furloughed, with a lot of time at hand and anxiety to depressurise. Vehicle traffic volumes are at record lows. In combination, these factors create an enormous lure to go outside and ride huge mileages on empty roads.

As Northern Hemisphere weather warms, the allure of riding outside will only increase. But if most professional riders are on trainers, inside, there is no argument that you need to be out riding 100-milers to achieve your training goals.

You only need an hour

There is no question that an hour is a sufficient duration for a high-intensity training ride which will put even the most resilient cyclists well into their own pain cave. Four-hour endurance rides are simply not justifiable, notwithstanding the mindful escapism of long-distance riding in a time of great global disquiet.

If you wish to have a four-hour endurance ride, there are a diversity of excellent indoor cycling apps, and the best turbo trainers will facilitate that in your living room. But nobody can venture an argument that they are being disenfranchised from their cycling therapy of mind by only riding for an hour.

Consider the plight of cyclists in each of the three Grand Tour host countries: Italy, France and Spain. They aren’t allowed to ride real roads, at all. It is a similar situation in South Africa, one of the world’s most renowned fair-weather riding destinations.

Africa’s most industrialised country, with the best mix of road, gravel and off-road routes, has seen one of the world’s most severe lockdown regimes. No exercise is allowed.

Riding for an hour is plenty of time to be mindful. To experience a change of scenery, which is part of the subconscious therapy of cycling, as you devour miles. And if you apply focus, an hour is enough time to suffer through a brutal training session outside.

Longer rides increase your exposure to having an accident, that is simply statistical arithmetic – more rolling wheel time on the road equals greater risk. You could also find yourself crashing in an isolated location, which would require an ambulance to be dispatched and possibly rerouted from assisting an elderly COVID-19 patient in need of hospital-bound transport, not to mention keeping infected patients out of a hospital bed.

Your freedom to ride during the lockdown is a privilege, not a right to gain some huge endurance riding base miles. Be guided by a simple question of principle: what if you have an incident, in a remote location, and must compete with a village pensioner for that ICU bed or medical resources?

Rather keep your riding loop local, familiar, and safe.