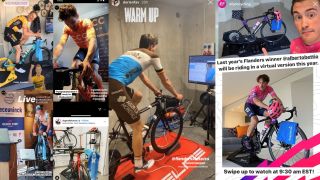 As pro cycling adapts to the realities of a season disrupted by lockdown, riders are exploring the opportunities offered by eRacing.

With teams desperate to remain active in some stream of social-media exposure during the coronavirus crisis, some riders have embraced the intensity of attaching their bikes to a turbo trainer and competing online.

The first virtual Tour of Flanders was held at the weekend, and was won by 2016 Rio Olympic road race gold medallist Greg Van Avermaet (CCC Team). The turbo-trainer-adapted race ran over the final 32km of Belgium's most-celebrated one-day Classic.

A telling feature of this race, for fans who bothered to check their preferred rider's Instagram presence, was the innovative amount of sponsor-exposure generated.

Some riders made a terrific effort of having brand-appropriate towels draped over their bikes. Sponsor equipment was present in the background, and previous race numbers and jerseys added impact and display diversity.

Cycling fans often desire to ride bikes and use gear that is prevalent among the pro peloton. The same theme relates to static bike training configurations, tricks and tips. So let's look at those professional trainer set-ups and see how your home-training pain cave compares.

Jasper Stuyven did his virtual Tour of Flanders properly. The Trek–Segafredo rider must have spent most of his lockdown weekend preparing for Sunday's virtual race. His indoor training area looked superb, with the combination of his Trek Madone and Saris H3 turbo trainer rolling on a wooden floor, which no doubt helped a touch with damping any vibration.

Stuyven's Tour of Flanders virtual paincave used his home resistance-band gym as a display structure to hang some race jerseys on (nice touch), and the obligatory team banner was taped to a tiled wall.

Thomas De Gendt has a very neat indoor-training area at his disposal during lockdown. The Lotto Soudal rider obviously did some tidying up for Sunday's race, as his pain cave looked like there was a place for everything, and that everything was also in place. De Gendt's Ridley Dean Fast time-trial bike framed the background, while a sponsor-correct Tacx towel draped over the handlebars of his Ridley Helium SLX race bike matched his Neo turbo trainer.

Yves Lampaert had a minimalist visual configuration for his virtual Tour of Flanders set-up. The Deceuninck–QuickStep rider sported a Tacx Neo on a tile floor, surrounded by some natural-wood architecture, with one wall featuring a lovely sunburst outdoor riding portrait of Lampaert riding with a training partner. It was a poignant reminder of riding before the lockdown, and Lampaert scores ample points for artistic curation.

The Deceuninck–QuickStep man was on point with his team branding, too, but the Belgian was slightly underwhelming in terms of screen size, riding his virtual race on a mere laptop – in fact, two of them, it seemed. Lampaert also scored additional style points for wearing his Oakley sunglasses – one of the very few eRacers to do so.

Lotto Soudal's Tim Wellens rode quite a standard indoor racing set-up for the 2020 virtual Tour of Flanders. Hooked up to his Tacx Neo 2T smart trainer, Wellens had a vertical team banner standing behind him and was one of the few riders to don gloves for his virtual race. This could be explained as an outcome of superstition or habit, or even an attempt to recreate elements of a tangible reality in this new pursuit of virtual racing.

Mike Teunissen did a splendid job of blending traditional with contemporary in his pain cave. The Dutchman had a high-resolution television screen, mounted on a tri-pod. On the wall behind him was a decorative scale-model wooden race bike and some spoked wheels.

Last year's Tour of Flanders winner, EF Pro Cycling's Alberto Bettiol, opted for an authentic lounge feel during his 2020 virtual Tour of Flanders. The Italian's Cannondale was attached to a Tacx Neo smart trainer, but beyond his normal team kit, there were no additions of note to Bettiol's indoor-racing environment. It was very much leisure instead of a traditional pain cave.

Oliver Naesen truly embraced the architectural values of entering a stark pain cave for his digital Tour of Flanders. The AG2R La Mondiale Classics specialist went for a full-concrete feel, riding in what looks like a garage – or possibly a prison cell – aboard his Elite Direto X smart trainer.

There was no beautification of his pain cave, nor any splendid team banners. Naesen simply had an Elite trainer mat on the floor and his large-display television screen mounted on a tripod up ahead. We suspect that the compressor in the corner was an accidental item that wasn't removed from the garage, instead of something that would have to be used in the case of a mechanical…

He also seemed to be keeping an eye on a WhatsApp chat whilst racing, so extra points for multi-tasking.

Scion to the great Irish cycling dynasty of Roche, Nicolas Roche of Team Sunweb competed in the virtual Tour of Flanders in his Monaco apartment. The 35-year-old kept things subtle with a simple Elite Direto X smart trainer set-up in his living room.

Zdenek Stybar was one of the few virtual Tour of Flanders riders to venture somewhat outside. The Czech Deceuninck–QuickStep rider had his Tacx Neo turbo trainer set up on the balcony, with a humble laptop mounted up ahead to stream his race.

Like his Deceuninck–QuickStep teammate Yves Lampaert, Stybar also scored style points for riding with his Oakley sunglasses balanced on his head. That puddle of sweat suggests an absence of a fan to provide additional cooling airflow, which might have been a rookie mistake. His team sponsors were well served with a banner in the background, though.

CCC Team's Greg van Avermaet won the 2020 virtual Tour of Flanders, and he did it with very simple set-up, accompanied by his Giant TCR Disc and Elite Direto smart trainer. There was no elaborate pain-cave detailing, with symbolic race images or jerseys decorating his room. The Belgian had a vertical team banner behind him and that was quite sufficient to help power him to victory. Proof, indeed, that with indoor training, it really is a question of mind over matter.

Deceuninck–QuickStep's youthful Remco Evenepoel was very excited about his first Tour of Flanders, albeit digitally. His Specialized S-Works Tarmac ran on a Tacx Neo smart trainer, and the Belgian had single-visor Oakleys on, too, as he was riding outside, instead of indoors, like most of his rivals.

A big team banner fulfilled his commercial obligation, but, because he was riding outdoors, it is technically impossible to rate Evenepoel's pain cave, although the Belgian definitely embraced the spirit of static-bike suffering.