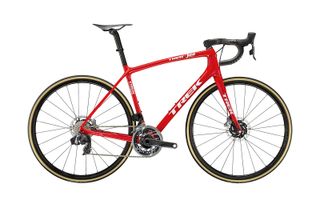 With a history spanning some four decades, the Trek Bicycle Corporation has become one of the foremost bicycle makers in the world. What started out as a small steel frame-building company operating out of a carpet warehouse in Waterloo, Wisconsin, has grown into one of the global leaders in terms of bicycle design and innovation.

Trek's progressive and holistic approach to design and performance continues to redefine the rhetoric behind the frame manufacturing process. In the early '80s, they tore up the script by borrowing technology from the aerospace industry, which saw such innovations as bonded-aluminium and carbon composite frame architecture in the form of the 2000 and 2500 bicycles. This eventually led to the brand’s first moulded carbon-fibre frame, the 5000, and later the development of OCLV carbon, which is on par with the aeronautical industry standards for carbon fibre.

Fast forward to today and nothing much has changed except perhaps the fact that it's more committed to disrupting the industry than ever before. Trek is as much about racing at the sharp end of the sport as it is commuting or simply just enjoying a bike ride — and its range and ethos validate these sentiments. With two professional teams in Trek-Segafredo WorldTour men’s and UCI women's teams, Trek also promotes cycling through their ambassadorial GART (Great Athletes Ride Trek) program, where former professionals such as Jens Voigt and Alberto Contador as well as other influential athletes showcase Trek as a lifestyle brand.

With the recent news of multiple Grand Tour-winner Vincenzo Nibali joining the Trek-Segafredo ranks in 2020 the US-based company’s upward trajectory in terms of popularity and sales looks set to continue for the foreseeable future.

The once-simple exercise of choosing a bicycle has become an appreciably complex decision owing to a plethora of new riding disciplines and technological advancements.

There are five different types of road bikes available in Trek’s current catalogue — aero, endurance, time trial, climbing and gravel, each of which differs based on design and function.

As the name suggests aero road bikes are designed for speed while still retaining some form of compliance and comfort. Climbing bikes are ideal for hilly/mountainous routes and are pretty decent all rounders. Endurance bikes offer a combination of durability and comfort while time-trial bikes are more outlandish-looking in their appearance and built for speed. A newcomer to the fold is the gravel bike concept which opens up the world of off-road excursions taking on the form of pseudo-road bike.

Trek offers a wide selection of specification for each of the models in their range. Most of the brand's road frames are available in two different types of carbon, as well as aluminium and denoted by SLR (Trek's lightest 700 series OCLV carbon), SL (500 series OCLV carbon) or ALR (300 sereies Alpha Aluminium).

Different geometry options are also available on certain models, with the majority featuring regular H2 geometry and some offered in the more aggressive H1 geometry, designed specifically for racing.

The latest model of the Trek Domane has been given a makeover, with the comfort-enhanced model in the Trek road bike range being given a number of aerodynamic cues, along with an all-new Isospeed decoupler design.

The frame and fork are designed to take up to 38c tyres, making the Domane an incredibly versatile road bike, perfect for all-day comfort, and with the addition of the new Domane+ LT - Trek's latest performance road e-bike, the all-day comfort is now available to more people than ever.

The mid-range Domane SL, which is built upon a carbon fibre frame that still sees dual isospeed for comfort-enhancing vibration damping, starts with the Domane SL 4 in the US and UK at US$2,399 / £2,100, and with the SL 5 in Australia at AU$3,999.99.

The top-range Domane SLR is also carbon fibre, gets the adjustable top-tube based IsoSpeed from the Madone, and includes integrated storage in the downtube.

With the latest Domane SLR launch came the introduction of Trek's new slightly-amended T47 threaded bottom bracket shell, and removal of the women's models in the range - a move recently also taken by Specialized.

Rim-brake actuated models are still available, albeit now much harder to come by than the disc variants, with the SLR model losing rim-brakes altogether unless you're looking to build your own.

In terms of pricing, you can expect significant jumps as you move up the list with the range-topping Domane SLR 9 Disc eTap pegged at a cool £9,650.

As the lightest bike in Trek’s road-bike portfolio, the Emonda has been built from the ground up to excel in mountainous topography.

Favouring stiffness over comfort, the Emonda’s tubing is fairly thin, rounded and minimalist compared with the Domane and Madone.

Of course, there are aluminium versions — the ALR 4 or 5, both of which have added levels of comfort dialled into the geometry through the clever use of welding techniques Trek calls, ‘Invisible Weld Technology’.

The Emonda is available in both disc- and rim-brake guises resulting in a weight difference of up to 1.3kg in favour of the rim option.

The high-end versions of the Emonda come specced with Trek’s 700 Series OCLV carbon layup which is lighter and more forgiving, especially when tricked out in big-volume 28mm tyres.

You’d expect something as aero-looking and performance-orientated as the Trek Madone to possess a harsh and unforgiving ride quality but it doesn’t. Like the Domane, the Madone also utilises an IsoSpeed decoupler but in this application, it’s located in the top tube and offers a certain degree of adjustability — something Trek claims has boosted comfort and stiffness by 17 and 21 per cent respectively.

It’s all very clever. The Madone however, has always been a proponent of aerodynamic trickery and, as such, employs a compendium of clever go-faster techniques such as an integrated two-piece carbon bar and stem (SLR models), Kammtail Virtual Foil tubing and lighter, more aero disc brakes that will accommodate tyres of up to 28mm.

A lighter, rim brake version is also available with repositioned front brakes behind the fork for improved aero proficiency. As the range-topper in the Trek road bike range, all Madones feature carbon frames and high-end groupsets.

It’s so good, Trek still haven’t found a way to make it faster

The Trek Speed Concept hasn’t changed much over the past five years but that just shows how good its design and aerodynamic recipe was to begin with. Utilising the company’s 500 Series OCLV carbon layup, Trek has managed to keep the overall weight to a minimum (8.96kg) without compromising aerodynamics.

The standard colour-ways are extensive for both men’s and women’s options but if that’s not enough it can be customised as a bespoke Project One design.

The Speed Concept comes equipped with an 11-speed drivetrain finished off in meld of Shimano Dura-Ace and Ultegra bling; and can be fitted with bolt-ons such as the SC Draft Box 2 and SC Speed Box.

Despite its weight, the Checkpoint is impressively capable on a wide range of surfaces, making it ideal for those who enjoy venturing off the beaten track

The Trek Checkpoint combines the hallmark features of the Domane road racer and Boone cyclo-cross bike. Available in both aluminium and carbon variants, the Checkpoint can be enjoyed on a range of surfaces but only really comes alive in a gravel environment — as Trek-Segafredo’s Peter Stetina and Kiel Reijnen discovered when they raced the 2019 Dirty Kanza gravel race aboard custom Checkpoints.

Compared to the Boone on which it is based, the Checkpoint has a taller stack and lower bottom bracket for added stability but retains a similar wheelbase and chainstay length.

As far as comfort goes the Checkpoint’s ride quality can be a little abrasive at times despite its off-road bent. To help curb the harshness, SL versions use the company’s fabled IsoSpeed decoupler while aluminium Checkpoints rely on the use of bigger-volume tyres to smooth out trail chatter.