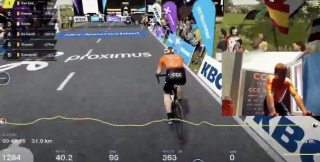 Greg Van Avermaet lagged behind at the start but after saving his efforts for the ascent of the Paterberg the Olympic champion surged ahead and soloed in for victory in the unprecedented virtual Tour of Flanders.

Flanders Classics, organisers of the Tour of Flanders, hyped up the 'lockdown edition' after the COVID-19 pandemic halted all sporting events worldwide since early March. With De Ronde postponed, thirteen riders took to the BKool virtual platform to compete over a 32km course that included simulations of the Kruisberg, Oude Kwaremont, and Paterberg.

Van Avermaet's virtual success came two days after his CCC Team announced that it had heavily reduced its riders' salaries for the remainder of the season and suspended the majority of its staff.

Up ahead, Evenepoel was caught by Thomas De Gendt (Lotto Soudal), defending champion Alberto Bettiol (EF Pro Cycling) and Nicolas Roche (Sunweb) but their lead plummeted on the Oude Kwaremont where Van Avermaet and Naesen tacked on.

Van Avermaet put in his winning move on the Paterberg and it was game over for his rivals.

"My heart rate hasn't been that high for a long time, I think," Van Avermaet said from his attic training room to Sporza. "I'm certainly satisfied with my performance. It's a bit peculiar to race from home, but I did my best."

"At the beginning, I was shocked by the speed and because of that I had to drop back on the Kruisberg, but a bit like in real life I put everything into the Paterberg. After that, it was like dying to the end. I was really a bloc. "

Although lacking a few hundred kilometres, Van Avermaet said it was like a real race but without drafting. "It's fun to do. Without exaggerating, I think we all had a good time.

"It was a very nice idea. Everyone loves the Tour of Flanders. It's not a worthy alternative to the real Tour, but we were able to entertain the people a bit."

Pre-race favourite Evenepoel was disappointed in his strategy and admitted he was caught off guard when Van Avermaet attacked. "I saw Greg Van Avermaet standing up on the Paterberg in the images. I thought, what's he going to do? But he was right to do that," Evenepoel said.

“It was really heavy there and that is not one of my greatest qualities. It was tough, yes. I was still trying to come back, but they just kept riding away. Then it was game over.

"I went super hard for 45 minutes. It was good training. I have only been training for a few days now and my motor only got going after 10 minutes. My heart rate is still fairly high."