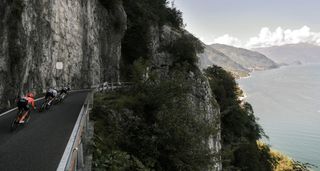 Riders in the breakaway at the 2020 edition of Il Lombardia descend on the roads above Lake Como (Image credit: Getty Images Sport)

WorldTour racing continued with Il Lombardia, the second Monument of the revised late-season calendar, on Saturday with Jakob Fuglsang (Astana) taking the coveted victory ahead of George Bennett (Jumbo-Visma) in Como, Italy.

It was the second Monument that Fuglsang has won during his career after winning Liège-Bastogne-Liège in 2019. He's had a successful season so far, with overall victory at Vuelta a Andalucia Ruta Ciclista del Sol in February, followed by fifth at Strade Bianche and second overall at the Tour de Pologne, both in August.

The race was marred by an alarming crash from Remco Evenepoel (Deceuninck-QuickStep), who lost control of his bike and hit a low stone wall on the descent of the Muro di Sormano with 40km to go, flipping over the wall and into the ravine. He suffered a fractured pelvis and a right lung contusion, but the team confirmed his overall condition as "good" and he is expected to be transported by aeroplane back to Belgium in the next 24 hours.

In addition, Maximilian Schachmann (Bora-Hansgrohe) was taken down by car on the course, and, although he finished seventh, he was left with a fractured collarbone. The UCI has launched an investigation.

Bike racing is inherently dangerous, but the intensity of the rescheduled COVID-19 season seems to have amplified the risks the riders face and led to more terrible accidents and injuries.

Fabio Jakobsen's serious injuries sustained at the Tour de Pologne shocked and angered the peloton, and so did Remco Evenepoel's crash at Il Lombardia, while the terrible road surface at the Critérium du Dauphiné forced Steven Kruijswijk (Jumbo-Visma) and Emanuel Buchmann (Bora-Hansgrohe) to retire and has put both riders' Tour de France at risk. And then the presence of a car driving onto the course in the final kilometres of Il Lombardia caused Schachmann to crash and suffer a fractured collarbone. As they say in Italy: Basta! (Enough!)

Riders are, naturally, responsible for some of the crashes, but so much more can be done to protect them, be it safety nets on low bridges like the one on which Evenepoel crashed, better and independent safety audits as teams are now demanding, or simply stronger, impact-designed barriers for sprint finishes.

Losing Remco Evenepoel is a huge blow for everyone

Remco Evenepoel's 2020 season ended dramatically due to his crash at Il Lombardia.

He has been diagnosed with a fractured pelvis and damaged lung, with Deceuninck-QuickStep team manager Patrick Lefevere telling Belgian television that the head of his femur was also damaged.

Evenepoel is expected to make a full recovery, and was clearly fortunate because the consequences of the crash could have been much worse. However, losing arguably the most exciting and most promising rider in the sport is huge blow for everyone. It is also another reason why riders should be protected in races, with the best possible safety measures.

Evenepoel was planning to target the Giro d'Italia on his Grand Tour debut in October. He was going to challenge Vincenzo Nibali, Jakob Fuglsang, Simon Yates and 2019 winner Richard Carapaz. The excitement over Evenepoel's recent run of success and his Grand Tour potential had even led the bookmakers to make him the favourite for overall victory. Now, the Giro d'Italia script will be much weaker and the race far less interesting without him.

Cycling must learn to look after its biggest assets.

Jakob Fuglsang has so often been cycling's nearly man, but his victory at Il Lombardia confirmed him as a successful Classics rider and gives him the confidence to target the overall classification at the Giro d'Italia.

The 35-year-old Dane added the 114th and unique summer edition of Il Lombardia to his palmarès, above his 2019 victory at Liège-Bastogne-Liège and overall victory at the 2019 Critérium du Dauphiné. He has won just 10 races in his 13-year WorldTour career, often falling short or suffering due to crashes when the moment seemed within reach, especially at Grand Tours.

Fuglsang could have won much more, but understands the tough rules of every professional cycling career. He rightly looks ahead to the next race rather than looking back to the disappointment of what could have been.

"I'm happy with everything I've achieved. I could have perhaps won races if I knew what I know now when I was 25, but that's the way you evolve and learn as a rider," he said after winning Il Lombardia.

George Bennett gets his big day out

George Bennett missed out on victory at Il Lombardia, but second place was a huge result for the Kiwi climber, and proved that he was right to take an alternative route via the Italian Classics to the Tour de France , where he will be a key team player and mountain domestique for Jumbo-Visma.

Bennett is known for his love of hard training and sacrifice, occasionally overloading his skinny climber's build and then paying massively for it in races. This time, he convinced the Jumbo-Visma performance team to allow him to miss the showdown with Team Ineos at the mountainous Critérium du Dauphiné and get a chance to ride for himself in Italy.

He won Gran Piemonte last Wednesday and then followed it up with second at Il Lombardia. He only went deep on two days out of seven – the other days were recovery or recon days – allowing Bennett to recover and freshen up for the rapidly approaching Tour de France.

On Sunday morning, he quickly headed home to Andorra for a final block of Tour de France altitude training, but will travel to Nice next week fresh and ready for three weeks of intense racing. His personal results means he is happy, and loyal to the Jumbo-Visma cause.

His fresh legs and personal satisfaction are arguably his and Jumbo-Visma's most important results from Italy.

Il Lombardia proved to yet another hard and selective race, with Jakob Fuglsang deserving to win alone along the Como lakefront. It was a great day of racing, despite Remco Evenepoel's terrible crash.

However, the Italian cycling tifosi and the Italian media struggled to fully enjoy the day, the anger of the overlapping and compressed 2020 season still hurting their pride and hurting the Italian races.

The presence of the Critérium du Dauphiné meant that many of the usual Il Lombardia contenders were on the other side of the Alps, racing hard and preparing for the Tour de France, rather than fighting for glory in the Lombardy hills.

Only Evenepoel, Fuglsang, Nibali, Carapaz and Mollema stood out on the weakened Il Lombardia start list. To make matters worse, the racing in France overlapped and stole some of the limelight and television coverage of Il Lombardia.

"We shouldn't forget a single word of what has happened. It's OK to suffer sometimes, but not to be kicked up the backside," he wrote on Tuttobiciweb.

"We should at least have the dignity to remember to feel offended for the future. Otherwise, we'll always be treated as the village idiot and [philosopher] Seneca will be proven right when he said: 'If you allow yourself to be dragged along all your life, you shouldn't be surprised if you eventually get walked on.'"